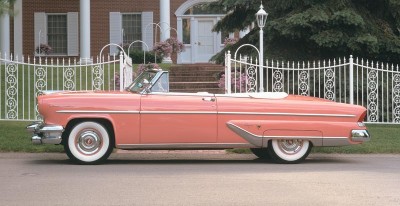 The styling of the 1955 Lincoln borrowed from years past, but included fresh new updates.

The 1955 Lincoln Capris were about as new as they could be, considering they came in body designs that already had three seasons on them. Aside from an obligatory touch-up of external details, the 1955 Lincolns sported an all-new powertrain.

By boring out its ohv V-8 engine, Lincoln increased displacement from 317.5 cubic inches to 341. The extra cubes, a new high-lift camshaft, standard dual exhausts, and a half-point compression boost to 8.5:1 produced almost 10 percent more power than in 1954.

Thus, the "Fleet-Power" mill now made 225 bhp at 4,400 rpm and 332 pound-feet of torque at 2,500 rpm. In place of the Hydra-Matic transmission Lincoln had been buying from General Motors, it now had its first homegrown automatic: Turbo-Drive. It consisted of a torque converter and three planetary gears, and offered the availability of low-gear starts if the accelerator was floored. The new powertrain propelled the two-ton-plus 1955 Lincoln to 60 mph in 12 seconds.

Frontal styling was freshened with a new grille made up of horizontal bars. Headlamps were newly hooded in period style. At the rear, the impression of length was enhanced via rear-leaning fender ends. Bodyside sculpting, which had risen high on the rear quarters of 1952-1954 Lincolns, was now confined to the lower half of the body and pointed forcefully forward.

There were parts of the existing Lincoln package worth keeping. The 1955 models continued on the same 123-inch wheelbase as before, and used the same ball-joint independent front suspension that won the "Road Race Lincolns" (so-named because of their prowess in Mexico's Carrera Panamericana) raves for their handling.

In spite of the improvements, Lincoln suffered sales­wise in 1955, which was a phenomenal year for the auto industry as a whole. Model-year production slumped to 27,222, a 26 percent drop from the year before. (Even the 1952s, built under government-imposed production limits due to the Korean War, were more numerous -- by 49 cars.)

Tom purchased the car featured on these pages in the Chicago area. Though it was in original condition, he says that except for the body and engine, "the rest of the car was in boxes."

Accessories on the since-restored car include road lamps mounted in front-bumper pods, dual spotlights, door-handle shields, and a locking fuel-filler cap. The body is sprayed in Cashmere Coral; the interior -- which features leather upholstery -- is in Cashmere Coral and Ermine White.