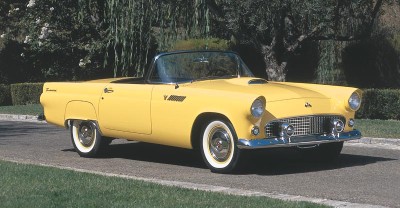 Style, power, and comfort: Put them together in an automobile and it's sure to be a winner. That's the combination that worked so well for the 1955 Ford Thunderbird convertible.

The introductory T-Bird had style in spades, owing to its low, two-seat bodywork. (Ford pointed out in advertising that the Thun­derbird's height from the cowl to the ground was just slightly more than three feet.) It had a 102-inch wheelbase -- more than a foot shorter than a 1955 Ford sedan -- yet borrowed heavily from the many new styling touches adopted for the year's full-size Fords. The Thunderbird managed to avoid being cluttered with excessive chrome trim or outlandish two-tone paint schemes.

The power part of the equation came from the 292-cid version of the corporate "Y-block" ohv V-8 shared with Mercury. Equip­ped with a Holley four-barrel carburetor and dual exhausts, it made 193 bhp at 4,400 rpm in cars built with the standard three-speed manual transmission, or 198 bhp in those fitted with the extra-cost Fordomatic automatic gearbox. Overdrive was also available for stickshift cars.

Though it was inspired by the many -- mostly foreign-built -- sports cars that were capturing the imagination of American enthusiasts in the early 1950s, the Thunderbird was built like a little luxury car. Its family car-like suspension delivered a softer ride than "pure" sports cars (and would be made softer still in 1956).

Roll-up windows and the availability of a removable fiberglass top lent more all-weather comfort than the folding tops and snap-in curtains associated with most other two-seaters. A standard telescoping steering column helped drivers find an optimal position behind the wheel. Optional power assists cradled passengers in the lap of luxury.

While other sports cars for sale in the U.S. sold in small numbers, the first-year T-Bird managed to win over 16,155 customers. Though great numbers for the market class, they were small by Ford Motor Company standards; come 1958, a far more popular four-seat Thunderbird replaced the winsome two-place cars of 1955-1957.

Ray Scherr, of Westlake Village, California, owns the 1955 Thunderbird featured here. It is the product of a two-year restoration completed in 2002. Painted Goldenrod Yellow -- one of five colors available for that year's T-Birds -- it is equipped with automatic transmission, power windows and seat, a radio, and a heater.