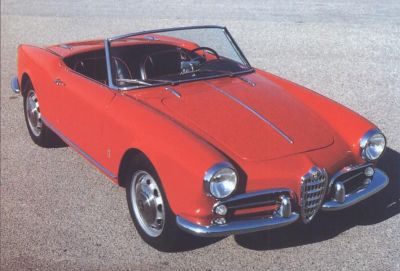 The basic Giulietta Spider was powered by a 1.3-liter four-cylinder engine that was good for 80 horsepower by the time this 1959 first hit the road.

Back in Alfa Romeo Giulietta Sprint coupe-land, more potential customers were queuing up even before the first orders were filled, a happy state of affairs that led Alfa to continually develop the Sprint. There was precious little wrong with it right from the beginning -- excepting, maybe, the column-shift linkage installed in early coupes -- but much potential lay in the basic design, especially for top performance.

Essentials were kept. The 1.3-liter light-alloy twincam inline four was a real jewel, a rev-happy little powerplant that was good for 60 horsepower even with a single Solex carburetor. The four-speed gearbox was equally good; both could take considerable hard use and remain reliable.

Front and rear suspension were conventional, though the coil-sprung live rear axle was unusually well-located, boasting both a trailing arm on each side and a central triangular locating link attached to the axle housing itself. The large drum brakes were more than adequate for the 1940-pound Giulietta.

First on the improvements list was an increase in performance. In the 1955 Mille Miglia, the Giuliettas were badly beaten by the 1300cc Porsches. This intolerable state of affairs led Alfa to develop the Veloce, available from 1956 onward in either Sprint coupe or Spider convertible form.

A pair of Weber carburetors and internal modifications raised power from the original 60 to more than 90 horsepower at a raucous 6,000 rpm. A floor-mounted gearshift was supplied as well, and the suspension was stiffened.

But most of the company's effort went into weight reduction: Plastic side windows and aluminum doors and hood were used, as were fasteners of reduced size throughout the car (meaning that nuts, bolts, and screws were not interchangeable between normal Giuliettas and Veloces).

These measures cut away some 250 pounds. The result, according to one contemporary tester, was a car that could reach 60 mph from rest in 10 seconds and attain a maximum speed of slightly more than 110 mph. Not bad for a mere 78.7 cubic inches!

The standard car was no slug either. It would make the 0-60 sprint in less than 15 seconds and reach a 100-mph maximum, while delivering fuel economy in the 25-30 mpg range.

In time, horsepower would be increased again, first by retuning the engine, which brought output up to a claimed 80 horsepower for the standard Giulietta, then by installing a new, larger powerplant of near-identical design. This 1.6-liter (actually 1570cc) engine was rated at 92 horsepower in normal form and 112 horsepower in Veloce trim. It was joined to a five-speed gearbox that brought engine revs and interior noise levels down considerably.

So appreciated was the extra ratio by long-suffering owners that the factory introduced a five-speed conversion kit for the four-speed. Available from late 1962, the 1.6-liter engine/five-speed combination transformed the Giulietta into the Giulia.

In 1959, the Spider's wheelbase -- but not the Sprint coupe's -- was lengthened by two inches (from a very short 86.7) with consequent improvement to interior space. These dimensions also served the Giulia in its first years.

In 1964, toward the end of production, the 1.3-liter engine reappeared in Europe in a less-expensive coupe called the 1300 Sprint. However, this seeming rehash of the old Giulietta Sprint did include the front disc brakes that had been phased in for the Giulia.

The Sprint coupe was the first Giulietta to be produced, making its debut in 1954.

Get a rundown of the various Giulietta and Giulia models on the next page.