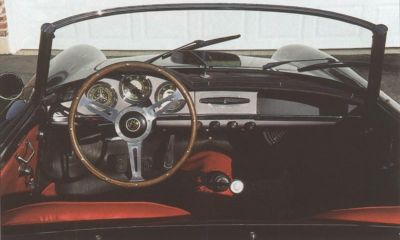 Early Giuliettas, like this 1959 model, had an open glovebox.

Nuccio Bertone was not given much time -- some say just 10 days, but that seems unlikely -- to come up with a design for the Alfa Romeo Giulietta. Fortunately, he drew little or no inspiration from the existing coupe styling model but instead handed the job to his designer, Franco Scaglione.

After having dealt with the technical challenges of bodying the Arnolt-Bristol and the aerodynamic forms of the brilliant Alfa BAT show cars in a somewhat flamboyant manner, Scaglione produced a simple, clean shape for the Giulietta coupe.

Its skin was stretched tight over the mechanical components and passenger space inside, and the overall proportions and management of details displayed Scaglione's genius. Not until another, much later, Alfa Romeo -- the 1967 midengine Type 33 Stradale -- would he create a more enduring design.

In the end, Bertone was able to complete four cars before the Turin show deadline, with final trimming and painting completed at Ghia. An unusual side-opening hatchback design was a feature of the first quartet; this less-than-rigid setup was replaced by a fixed rear window and separate trunklid when production started.

What Alfa management had not counted on was the public response. While no record of the lottery winners' reactions seems to have survived -- and it is unclear if all 200 actually received their prize coupes -- there were plenty of others who wanted to buy the new Giulietta Sprints. Some say 3,000 orders were taken at Turin, and more followed quickly. In any case, they -- and the cash customers -- were in for a wait, as only a dozen cars were completed through the end of 1954.

Once the tiny coupe's place in Alfa's production schedule was clear, Bertone offered up a roadster proposal. This, too, was a Scaglione design, one that bore more than a passing resemblance to his Arnolt-Bristol. But Alfa bosses were unimpressed by Bertone's topless Giulietta, so much so that, according to some accounts, the company actually lost the prototype (one of four built) entrusted to it.

A better reception awaited a design from Pinin Farina. That firm's effort had more of a fraternal appearance when seen alongside the Sprint coupe; open and closed sporting Giuliettas appeared to have been designed together, though no panels were interchangeable between them. Series production was ordered, and the first examples were shown to the public at the 1955 Paris Auto Show.

Max Hoffman, not surprisingly, was one of the most vocal proponents of an open Giulietta. As Alfa's U.S. importer, Hoffman wielded a great deal of influence. And he backed up his suggestions with a sizable order for cars, just as he had done when prodding Porsche to create the 356 Speedster and Mercedes-Benz to put the 300SL "Gullwing" on the market. Thus, the Giulietta Spider joined the family.

The Giulietta sedans, by the way, ultimately became the mass-market success Alfa hoped it would be. Within their boxy little bodies they carried the same spirited powerplant and superb suspension -- not to mention the same distinctive grille shell -- that delighted Sprint and Spider owners, and brought many of the joys of sports-car driving to those forced for practical reasons to opt for four doors. They also hit the market in 1955.

Form-fitting removable tops like this one were popular accessories for the European sports cars of the day.

Find out about the performance feats of the Alfa Romeo Giulietta and Giulia on the next page.