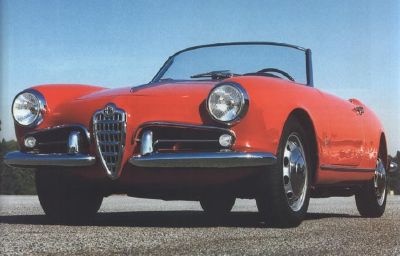 Having enjoyed an enthusiastic reception for its sleek Bertone-bodied Giulietta Sprint coupe, Alfa Romeo soon followed up with a two-seat Spider convertible, like this 1959 model. See more classic car pictures.

With an eye on the mass market, Alfa Romeo trained its sights on creating an affordable small sedan in the early 1950s. But being Alfa, with its history of great sporting machines, the temptation to make something livelier of the new car resulted in a real jewel -- the 1954-1965 Alfa Romeo Giulietta and Giulia.

In the ordinary scheme of things, cars are created under the watchful gaze of gifted individuals or by teams directed by product planners, marketing managers, and bean counters. The car born almost by accident, the product of what can only be called an afterthought, is extremely rare, and the odds of it achieving greatness are slim indeed.

Thus it is highly appropriate that the Alfa Romeo Giulietta -- an afterthought that definitely merits the mantle of greatness -- came into being as the result of a lottery, a long-odds enterprise if ever there was one.

To understand the twists and turns of the Giulietta's birth, it is necessary to go back to 1952, a time when Alfa Romeo was abandoning its traditional niche as a builder of limited-production, high-performance machines for a spot among the mass producers.

At the time, Alfa was short of cash, a far-from-unusual state of affairs that persisted until Fiat took control of the firm many years later. But the Milanese company did have a new car -- the Giulietta Berlina, a creation of the brilliant Orazio Satta Puliga -- designed and ready to go.

Satta had taken the best elements of the existing 1900 series and scaled them down, making improvements where necessary. Designed for mass production, this small sedan was a new concept for Alfa; 1900 sedans, coupes, and cabriolets had always trickled out the Portello factory's doors in small quantities.

In order to generate the revenue needed for Giulietta development and tooling, Alfa Romeo conducted what was, in essence, a lottery. Hordes of Italians were induced to buy interest-bearing company bonds, with the promise that 200 of them, chosen by random drawing, would receive brand-new Berlinas as a bonus when production got under way.

The lottery was a success, raising enough money to finance the new car. Mechanical components were quickly put into production to meet an announced goal of showing the new car during 1953. But at the appointed time, completed Berlinas were nowhere to be seen. Though this led many people to believe that the bond sale/lottery scheme was not strictly on the up-and-up, the simple fact was that body production was well behind schedule.

Something had to be done. Someone at the factory, perhaps inspired by a design study for a small coupe that had been kicking around the Alfa works since late 1952, decided a custom sports-car body wrapped around Berlina mechanicals might deflect attention away from the sedan shortage.

Alfa contracted with Carrozzeria Bertone for a Giulietta coupe to be shown at the 1954 Turin Auto Show. Whether this was initially intended to be merely an attention-grabber to quiet the chorus of mutterings about nonexistent Berlinas or a toy for the fortunate 200 is unknown.

Learn about the design traits of the Alfa Romeo Giulietta and Giulia in the next section.