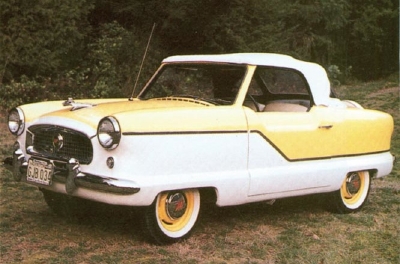 The 1957 Metropolitan went on sale in Britain in April of that year, where journalists were typically less forgiving than their American cohorts.

The Autocar, for instance, commented that "secondary roads . . . brought about a degree of fore-and-aft pitching which is not found on the more conservative type of small British car. . . . [The Metropolitan] is not a car with which one should take liberties in such matters as fast cornering."

Also during 1957, rumors surfaced that the Met might be produced in Australia, but nothing came of the notion. No matter, the car continued to do relatively well in its intended market niche, helped a bit perhaps by running changes to upgrade the car.

For example, in December 1957 the Met received a full-flow oil filter and a glove box door became standard; in January 1958 a one-piece rear window was fitted and exterior colors were changed.

Curiously, the severe recession of 1958 put a slight dent in sales, which slipped to 13,128 units. One would have expected an economy car to fare better in an economic slump.

But then shipments spurted to 22,209 units in 1959, and suddenly the Metropolitan was the second best-selling import car in the U.S., after Volkswagen. American Motors made much of that in advertising, but failed to mention VW's 5 1/2-to-1 margin.

There was another round of improvements that year. A functional trunklid was added, along with 5.60-13 tubeless tires (replacing 5.20s), and vent windows (for draft-free ventilation). Standard horsepower went to 55, thanks to compression bumped from 7.2 to 8.3:1. The difference made premium fuel advisable, however, so the 52-horsepower unit was continued as a no-cost option.

Then sales began falling again, with 1960 shipments sliding by nearly 38 percent to 13,874 units. With a substantial number of unsold cars on hand at midyear, AMC halted Metropolitan production even though 1960 would be the third-best year for Met sales.

By the time this 1960 model rolled out, horsepower had increased to 55.
none

But corporate attention was then focused on maintaining Rambler's spectacular sales rise, and it was evidently decided that the Met's long-term prospects really weren't all that bright since it was already seven years old. Then, too, the Met had lost its chief protagonist with the unexpected death of George Mason back in October 1954.

Estimates indicate that about 1,200 stayed in Britain, although Jonathan Glancey, writing in the British magazine Classic and Sportscar in May 1989, places the figure at "about 5,000."

One of the humble little Metropolitans even went to royalty, according to the Rambler Reader: "In recognition of the U.S.-British cooperation in design and manufacture of the Metropolitan, the British workers generously gave Princess Margaret a specially painted Met which she enjoyed driving about in her free time . . . that particular car was also popular with certain non-paying members of the motoring public, as it was later stolen" in London in February 1961.

To find out why the Metropolitan may have run its course in only eight years, see the final section of our article.