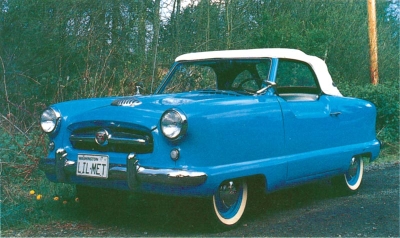 Skirted fenders, seen on this 1954 model, gave the Metropolitan a wide turning radius.
none

Initial reviews of the 1954 Metropolitan were mixed. Car Life called the Met a "big car in miniature" and judged it "fun to drive," opining that "for a second car in the family, we find it ideal."

Cam-and-lever steering was woefully old-fashioned even in the 1950s, but at least the Met's was light, quick (2.75 turns lock-to-lock), and fairly precise. The only real problem was the wide turning circle.

Road & Track was less impressed, reporting that the Met handled "exactly like a full-size stock American car. It has more than its share of wallow and roll on corners, and there is little seat-of-the-pants security when the rear end takes its time getting back in line."

A kinder assessment came from Motor Trend's Walt Woron, who spent nearly 1,700 miles with a Metropolitan hardtop, including a fast round-trip between Los Angeles and Pebble Beach.

Woron wrote that he was "fascinated by being able to whip it into corners at speeds that went up progressively and were much faster than I thought was possible. Remember, this isn't supposed to be a sports car, yet . . . it seems to have some of the sports car characteristics. It was actually hard to break the rear end loose; it only happened in a very hard turn with full power."

MT colleague Don MacDonald was downright bullish about the Met: "If this car doesn't crack the American small car market, there is no such market!"

On that subject, Nash advertising was both disarmingly candid and predictably hucksterish: "We know that the Metropolitan will not replace the family car because it is not designed as a substitute," said one blurb. "We deliberately created maximum front seat comfort and spaciousness, performance and economy for two adults, with adequate room for three. A utility seat in the rear provides for children."

There was no little hype in that. The Met's 50-inch-wide front seat may have been fine for two friendly grownups but was no fit place for three. And Motor Trend was not alone in finding the little utility seat "a joke." At best, it was habitable for two small children on a short ride. Nor was there much space for luggage or -- more tellingly for a "suburbocar" -- packages.

And what little space the Met had was accessible only through a lockable hatch that doubled as a backrest for that utility seat. On the other hand, two adults were more comfortable in front than might be expected. Hip and shoulder room were quite adequate, and leg room was actually a shade greater than in the big Nash Ambassador.

Information about a one-off version of the Metropolitan can be found by continuing to the next page.