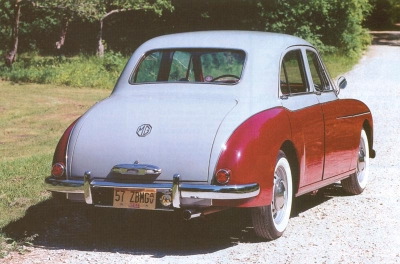 B Magnettes with the standard-width window offered less rear visibility than Varitones, but were cheaper and somewhat more popular.

The MG Magnette handled remarkably well. Superlatives flowed when the British weekly, The Autocar, tested one in November 1954: "Wet roads or dry make little difference to its performance . . . [A] slight controllable drift in the approved fashion, and a very slight heeling over, were the only indications of high speed. On the road, then, the standard of its cornering is very high."

Of course, with only 60 horsepower to move nearly 2,500 pounds, the ZA was not a fast car even by British standards, but it did appeal for its looks, character, and furnishings.

Its front coil springs and wishbones were right for the job, and the beam rear axle (hung on semielliptic leaf springs) was carefully controlled by a sturdy torque arm running from the axle housing to the bodywork.

Even so, first thoughts were not correct thoughts, for an extra front suspension tie-bar had to be added, and the torque arm was deleted before the first cars were delivered (but after the public launch), as engineers found that it simply did not work very well.

The ZA also made a good impression inside. Here was a four-seater with no "I'm bigger than that" pretensions, which meant separate front seats, a proper gear-lever and central parking brake on the floor, but also genuine leather upholstery and carpeting instead of rubber mats.

The instrument panel looked to be adorned with wood, but closer examination showed a rather low-rent combination of wood, painted metal, and Bakelite plastic. There were only four body colors at first, and precious few options, but there always seemed to be a queue to buy.

Although not quite the "quality car" BMC had hoped for -- there was no getting away from the dashboard "wood" -- the Magnette looked neat enough. And with an all-in U.S. price of $2,475 (POE East Coast), it was a fair modern imitation of the traditional upmarket British car.

Learn about updates made to the 1953-1958 MG Magnette in our final section.