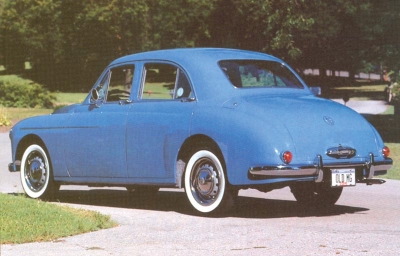 By 1950s standards, the MG Magnette was a beautiful little car, and Italian influences were everywhere to be seen. (Look at contemporary Lancias if you want proof.) So what if the trunk was small and there wasn't much space in the rear?

It was a lot roomier than the old Y-Series, and a traditional MG radiator proudly fronted one of the most-modern saloon shapes to come out of Britain for some time (the latest Jaguars excepted).

But the ZA Magnette looks small -- and it was, being only 167.5 inches long on a 102-inch wheelbase, and slim across the hips. It didn't have much power, either.

Though the 1489-cc version of the new B-Series four-cylinder eventually reached 72 horsepower (in 1956-model MGA two-seaters), it produced only 60 horsepower in initial Magnette tune.

But that was a lot more than the old YB's 46 horses, and the Magnette had a slick new four-on-the-floor gearbox to help exploit it. The latter would also show up in the MGA, and no one ever complained about that.

Though the ZB was made for just two years,

its production totals exceeded those of the ZA.

The Magnette's B-Series ohv four-cylinder engine was a much-modified version of the powerplant introduced with Austin's new 1947 A40 Devon, a small car that sold moderately well in the U.S. Though never very refined, the sturdy B-Series would power numerous BMC models for nearly two decades.

The B-Series was also used in various BMC/British Leyland light trucks into the 1980s, and lasted until 1997 in India's Hindustan Ambassador sedan based on the mid-1950s Morris Oxford Mark II.

Check out the next section for details on MG Magnette performance and styling.

After starting his career in the 1920s with British truckmaker Scammell, joined Morris Motors in the late 1930s to design MG chassis. From 1942 to 1949, he worked as chief engineer at Jowett, "up north" in Yorkshire, where he created the Javelin sedan.

He then returned to Morris, first as chief designer for all new-generation MG, Riley, and Wolseley family cars. In that capacity he led development of the MG Magnette ZA and Wolseley 4/44 sedans, as well as the larger Riley Pathfinder and Wolseley 6/90 models before being named chief chassis and body designer of the new BMC group.

Inevitably, Palmer quarreled with BMC chairman Leonard Lord, and left the organization in 1955. He then joined Vauxhall, General Motors' UK subsidiary, as assistant chief engineer. There he worked on small Vivas, medium-sized Victors, and Vauxhall's largest cars like the Velox/Cresta.

After retirement in 1972, he worked on various private projects, and enjoyed restoring and running a magnificent 1920s-type "Targa Florio" Mercedes. He died in 1999.