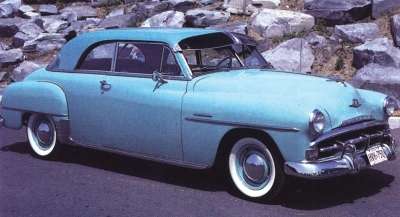 What follows is speculation about why post-war Plymouth sales tanked leading up to the 1951-1958 Plymouth Belvedere, but it makes more than a little sense. In 1930-37, K.T. Keller had been general manager of Dodge, which became the industry's No. 4 seller by 1933. But by 1938 it had slipped to fifth, then to seventh two years later. Did sentiment lead K.T., as Chrysler president, to favor his old division in the early postwar years so as to boost its fortunes? We think it's likely.

In any case, Dodge was supplied largely at Plymouth's expense. Helped by a protracted strike at GM, it easily overtook Buick-Olds-Pontiac to reclaim fourth in 1946, only to fall back again three years later. Plymouth, meanwhile, held onto third despite reduced production that prompted many prospects to buy elsewhere -- mainly Ford and Chevy. And because "make loyalty" counted for something back then, once customers were lost, they were tough to get back.

Then there was dealer loyalty -- or rather the lack of it. Initially limited to Chrysler outlets, Plymouth was also sold through Dodge and DeSoto dealers beginning in 1931. Having the low-price product in all the firm's franchises not only helped them survive "hard times" but improved Plymouth distribution. But the idea backfired once good times returned.

As a former Dodge-Plymouth dealer explained: "We advertised Plymouth heavily as our price-leader in order to draw prospective buyers. But over on the next street were the Chrysler and DeSoto dealers [who also] carried Plymouth [and were thus] ready to shave a few dollars off our price to make a sale. So our people were instructed to focus the prospect's attention on Dodge." As Chrysler and DeSoto agents did the same, pushing Plymouth wasn't really anyone's top priority.

Belvedere wasn't the last low-price hardtop, but it wasn't the first either. Still, this was one of the smartest closed Plymouths in recent memory: far less boxy than the rest of the 1951 line and arguably better-looking than its larger Chrysler Corporation cousins, yet practical enough for even K.T. Keller.

Then too, early postwar Plymouths were as dull to drive as they were to look at. Though enlarged from 201.3 to 217.8 cubic inches for 1942, their plodding L-head six hadn't changed much since its previous enlargement back in 1934. At 95 horsepower through the early-1949 models and 97 horsepower thereafter, output was competitive with that of the "Blue Flame Six" Chevy but not the flathead V-8 Ford, the traditional low-cost performance leader.

Finally, Plymouth suffered into the early Fifties by not having a fully automatic transmission. Chevy had pioneered this convenience among low-price makes with two-speed Powerglide for 1950, and it proved instantly popular. Ford replied the following year with its more efficient, three-speed Ford-O-Matic, and Studebaker also managed a slushbox.

But K.T. Keller insisted his cars have a clutch for "better control," so Plymouth didn't go shiftless until April 1953. Even then, its optional Hy-Drive was just a semi-automatic of the sort previously reserved for Chrysler's senior lines. You could leave it in top, but standing-start acceleration was interminably slow; for best performance you still had to move off in second, then shift to High as with an ordinary manual.

To find out about the initial Plymouth Belvedere, continue to the next page.