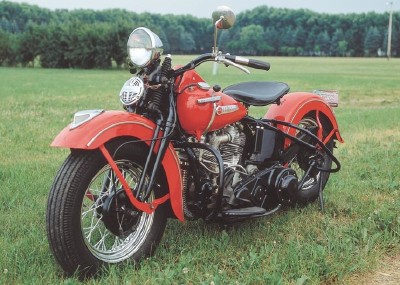 The 1948 Harley-Davidson FL was just one of many new Harley designs after World War II. See more motorcycle pictures.

The 1948 Harley-Davidson FL motorcycle introduced a number of changes to the Harley design, updates that showed the company wasn't resting on its laurels.

At Harley-Davidson, changes came thick and fast in the postwar years. The year 1948 saw the opening of a huge new engine production facility in Wauwatosa, Wisconsin, a few miles west of the Milwaukee facility.

But that year's biggest news -- at least to fans of classic motorcycles -- came in the form of Harley's new FL model with its "Panhead" V-twin.

Replacing both the 61-cubic-inch overhead-valve Knucklehead and the 74-cubic-inch flathead V-twins, the overhead-valve Panhead was available in the same two displacements and incorporated several improvements.

Beneath its roasting-pan-shaped rocker covers (from which it got its nickname) lay aluminum heads that were lighter and provided better cooling than their cast-iron predecessors. Hydraulic lifters reduced valve noise and eliminated most adjustments, while an improved oil circulation system resulted in longer engine life.

There were other changes as well. More chrome trim pieces gave the bikes a fancier look, and a steering-head lock was added in case the extra flash attracted the wrong kind of attention.

A latex-filled saddle was optional, as were eight equipment packages that let buyers tailor an FL to their own tastes.

Apparently, these changes were appreciated by the motorcycling public, for Harley-Davidson sold a record 31,163 units in 1948. But more big news was on the horizon.

More pictures of the 1948 Harley-Davidson FL motorcycle are on the next page.

The 1948 Harley-Davidson FL motorcycle came equipped with serrated exhaust pipes, a feature that would remain on Harley models until the 1970s. The bike also featured a "tombstone" taillight.

Harley-Davidson had a hit in the FL, selling more than 30,000 of the motorcycles in 1948.
The Harley-Davidson emblem came to be associated with quality in the post-war years.
The front fender light served fashion more than function, but was a notable styling feature.
The "tombstone" taillight introduced in the 1940s was used on Harleys through 1954.