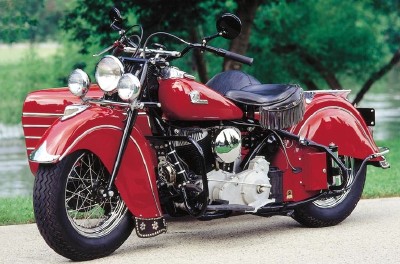 The 1946 Indian Chief became the company's only model after the war. This fine example is equipped with the factory sidecar. See more motorcycle pictures.

The 1946 Indian Chief motorcycle was similar to prewar big Indians; the engine remained a 74-cubic-inch flathead and tank graphics were unchanged. As always, "Indian Red" was a popular color choice, though others, including two-tones, were available.

New for the 1946 Indian Chief motorcycle however were girder-style could-spring forks adopted from Indian's radical 841 model that had been designed for desert use by the U.S. military during the war.

These new forks provided a full five inches of wheel travel versus the meager two inches allowed by the previous leaf-spring design.

Though the rear still featured the same plunger-type suspension, spring rates were softened. These changes resulted in an even smoother ride than before, a notable selling feature of the postwar models.

Another accessory was a spring-mounted sidecar, first offered in 1940, which carried fancy chrome speedlines and trim.

Go to the next page to see more pictures of the legendary 1946 Indian Chief motorcycle. 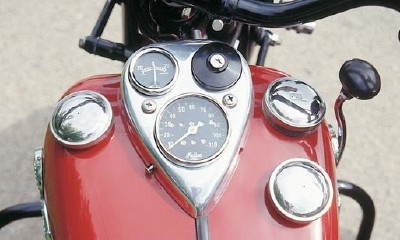 Though similar to to prewar versions, the 1946 Indian Chief motorcycle included upgrades such as new girder-style front forks and softer spring rates on the plunger-type rear suspension.

Indian's nicely designed one-passenger sidecar made its debut as a option in 1940.
An attached locking toolbox was a popular accessory of the day.
The Chief's 74-inch flathead engine was unchanged from its prewar design.
The sidecar carried fancy chrome speedlines and trim.
The sidecar was spring-mounted to cushion the ride. This Chief is also equipped with optional front and rear crash bars.
Buyers could substitute two-tone color schemes
After the war, Indian dropped all its four-cylinder and smaller V-tinws in favor of the big V-twin Chief.