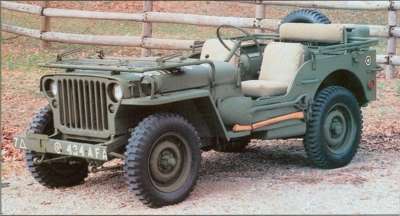 It's almost a reflex. Refer to a legendary small, four-wheel-drive American military reconnaissance vehicle from World War II -- a lower-case "jeep" -- and inevitably it will be called a Willys jeep, though this one should be called a 1944 Ford GPW.

The reasons for that are quite understandable. It was a Willys design for such a vehicle that the Army Quartermaster Corps approved in 1941, and that Willys-Overland popularized with civilian versions after the war. But at the same time, that gives short shrift to two other automakers central to the the jeep story -- American Bantam and Ford.

The Ford jeep built for World War II is now a rare and unique collectible.

It was tiny American Bantam that got the ball rolling in 1938, when it interested the Army in considering a modified roadster for the light field car the service had been seeking for years. With the considerable aid of consultant Karl Probst, American Bantam produced the essential jeep design by late summer 1940. The vehicle tested well, but military officials were leery of the tiny company's limited manufacturing capability.

The Ford jeep got the lowest scores in Army road tests.

To hedge its bets, the Army gave the Bantam plans to Willys and Ford to see if they could do any better. The Willys version came in too heavy, but its "Go-Devil" 61-bhp four-cylinder engine -- a creation of engineer Delmar "Barney" Roos -- delivered great performance. Ford's prototype had the poorest test results, but the company's manufacturing might couldn't be ignored.

The Willys model was accepted, but Ford contracted to build almost 300,000 GPW (General Purpose Willys) jeeps. However, the final design did incorporate the flush grille, inboard headlights, and flat hood that first appeared on the Ford prototype.

This restored 1944 Ford GPW, owned by Michael Hall, of Metropolis, Illinois, is now something of an heirloom. It reached civilian hands at a military surplus sale in Indiana in 1948 or 1949, he says, and has been in his family since the early 1950s.