Shortcomings of the Jeep 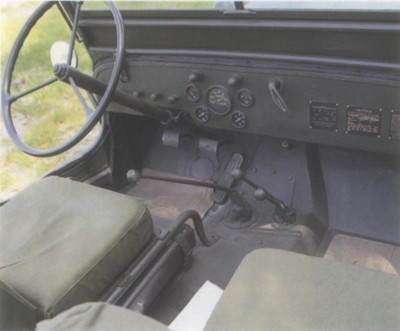 One of the shortcomings of the jeep was its nearly useless handbrake.
©Vince Manocchi

The jeep did have its share of shortcomings. The hand brake, for instance, was all but useless. Also, Ernie Pyle's comment aside, no matter how one sat, it was impossible to stay comfortable for very long. Only two positions were at all feasible: either bolt upright or slouched down to the middle of one's spine. Either way, the ride tended to encourage the development of hemorrhoids. Army medics referred to the malady as "jeep disease."

Given the jeep's lively performance and remarkable maneuverability, there was always the temptation to push it beyond any sane limits. Mishaps were not uncommon. Bill Mauldin, in one of his priceless Willie and Joe cartoons, depicts his two GIs surveying wrecked jeeps in a junkyard. The caption reads, "I'll be darned! Here's one wot wuz wrecked in combat."

Experienced soldiers appreciated the fact that the jeep would go places that a mule would not. "Lots of times a mule will balk if he doesn't think his leader is using good judgment," one GI observed. "But a jeep will always try!"

Predictably, the enemy undertook to emulate the little general-purpose machine, most notably with the Kubelwagen from Germany. Yet, this militarized version of the Volkswagen lacked the jeep's four-wheel drive, and its engine generated only a fraction of the "Go-Devil's" power. So it was never much of a success.

Sometimes, military exploits involving the ubiquitous jeep seem, in retrospect, to have been downright foolhardy. There were, for instance, the lightning strikes led by a British officer, Major David Sterling. One of these attacks was directed against a German airfield in North Africa. Under Sterling's leadership, a party consisting of 18 jeeps and their crews made its way through the desert, somehow escaping detection, until the perimeter of the airfield was reached. Then, in flying wedge formation and with machine guns blazing, the jeeps roared down upon the base, catching the Germans totally unaware.

In a matter of seconds the jeeps were gone. They vanished into the desert, leaving behind them an airfield littered with the wreckage of 25 aircraft destroyed and 12 more seriously damaged.

As far as the North Africa campaign is concerned, it is to Britain's Major General (later Field Marshal) Bernard Montgomery to whom much of the credit must go for the defeat of the brilliant Field Marshal Erwin Rommel. Montgomery knew the value of the jeep and made good use of it. Once, in an effort to minimize casualties, he employed several jeeps to put Rommel's tanks out of action.

Circling wide under cover of darkness, the small fleet of jeeps made its way deep behind the German lines. Traveling by night and lying low during the daylight hours, they came to a point on a Nazi supply artery where an ambush appeared to be feasible. The target was a group of fuel tanks carrying gasoline for Rommel's tanks.

There the jeep force waited for the approaching convoy to rumble into its section of road. When the trucks reached a given point, the jeeps drove at them at high speed. Weaving in and out of the string of vehicles, the jeeps left a trail of havoc, the entire line exploding into flame as they passed. Before any effective action could be taken against the jeeps, they were gone into the night.

The following morning, the tanks arrived at their appointed station, expecting to refuel from supplies that should have arrived during the night. As the result of the hit-and-run raid by Montgomery's jeeps, fuel was in such short supply that there wasn't even enough remaining to permit their retreat, much less to check the Allied advance.

Thanks to the destruction of many aircraft and the immobilization of the tanks, Germany lost the crucial battle of El Alamein, a critical turning point in the North Africa war. Two and a half weeks after this Allied victory Montgomery was knighted by King George VI.

The jeep had proved its worth. Squat, stubby, and so ugly as to be almost cute, this remarkable product of the combined genius of Karl Probst, Barney Roos, and no telling how many others was, in Ernie Pyle's words, a "divine instrument of wartime locomotion."

Lieutenant Colonel Manuel Conley summed up the record of the wartime jeep: "Versatile, reliable, and virtually indestructible, this magic motor vehicle bounced to glory as one of World War II's most enduring legends." Little did anyone know that the successes the jeep had in war were the first of many to come.

On the next page, learn about the jeep built for the sea: the Seep Jeep.