Uses of the Jeep 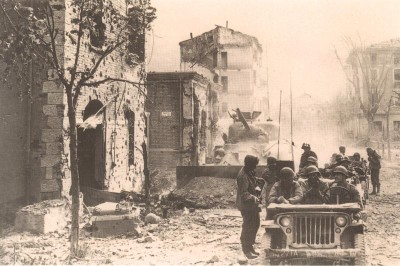 Medics soon found that the jeep, with minor modification, could be converted into a field ambulance and a Red Cross Unit.
©U.S. Army Transportation Museum

Uses of the jeep were endless. Oftentimes the jeep's hood served as a chaplain's altar, or as a card table for the more secular-minded. Suitably equipped, it could become a portable powerplant for aircraft searchlights, floodlights, shortwave radio sets, radar equipment, even welding apparatuses. It could be used as a field telephone exchange, a food supply unit for front-line fighters, or a medical unit for front-line first-aid.

Popular Mechanics reported in the November 1942 issue, "In Australia our soldiers were given the difficult task of laying an underground cable at an aerodrome without interrupting field operations. By pick and shovel it would have taken several days. But the jeep sped in, hitched to a plow, and the ditch was dug at ten miles an hour. Behind it came another jeep, towing a reel of cable, and next a third jeep pulling a roller that covered the cable and flattened the ground. The job was finished in two hours while Australians gaped."

The next page provides success stories and war feats of the World War II jeep. Read on to learn more.

From Where the Name JEEP?

Some say the name jeep evolved from different variations on the word itself. John Christy, writing in Motor Trend (December 1973) recalled "an assistant professor of military science who absolutely insisted in 1941 that the Dodge 1/2-ton command car was a jeep and the quarter-tonner was a peep."

Also, in the November/December issue of Special Interest Autos, Michael Lamm elaborated on the theme: "The controversy about who named the jeep still rages. Joe Frazer, president of Willys-Overland from 1939 till '44, says he coined the word by slurring the initials G.P."

The word jeep, though, was used as early as 1914 by Army mechanics charged with testing new vehicles. Then in 1937, tractors supplied to the Army by Minneapolis Moline were called jeeps. The forerunner of the famous B-17 was also nicknamed the jeep.

Despite the original designation as G.P., the jeep was called many other things as well. The more printable being Bantam, Blitz Buggy, Bub, Gnat, Quad, Pygmy, G.P., Midget, and Peep. Some believe that somewhere along the way, the name Peep gave way to jeep when soldiers and test drivers began calling it the jeep among themselves.

Yet another possible origin of the name is from a very peculiar place. "Eugene, the Jeep" was a little animal who first appeared as a character in the Popeye comic strip in September 1936. He was created by cartoonist E. C. Segar for King Features Syndicate, Inc.

This creature was a native of the darkest part of Africa and was supposedly a fourth-dimensional animal who lived on a diet of orchids. He had the power to go back and forth between dimensions at will. Naturally, while in the fourth dimension he was invisible to all-three-dimensional persons.

With the knowledge of this comic strip creature, it is not inconceivable that test driver Red Hausmann had the personality traits of 'Eugene' in mind when he first used the name "jeep." Couldn't the midget vehicle, like the little animal, get around a lot and make itself practically invisible? To be sure, the jeep would be a lucky thing to have in time of trouble.

Whatever the origins of the name, it is clear who popularized it. Katharine Hillyer, staff writer for the Washington Daily News, earned this distinction. One day in February 1941, Red Hausmann took Hillyer for a demonstration ride in one of the little vehicles. Their route took them through Washington's Rock Creek Park.

To the amazement of all, Hausmann began to display the amazing abilities of the jeep. He made the little vehicle claw its way up hills, wade through streams, and bounce across everything in between.

After Red had wheeled the car to a stop, somebody in the crowd asked, "What's the name of that thing, mister?"

Hausmann, with his hands still resting on the steering wheel, replied proudly, "It's a jeep."

Katharine wrote "jeep" into her story, and the photographer used the term in his picture caption. On February 19, 1941, the Washington Daily News ran the feature. As far as the public was concerned, the name was a fait accompli.