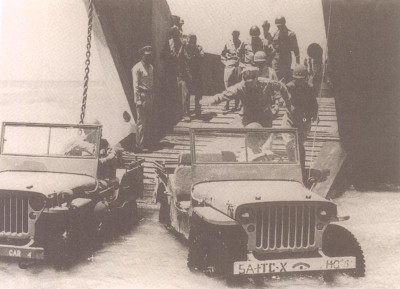 The jeep's light weight and high ground clearance allowed it to be driven directly off of a landing craft.
©Chrysler LLC

Of course everybody else wanted jeeps too, largely due to the jeep's versatility. For the time being, 5,000 was all "Uncle Joe" got, though eventually he received several thousand more. Reportedly, Soviet propagandists were at pains to inform the home folks that these remarkable little machines were Russian-built, in a secret factory.

However, the Russian soldiers evidently knew the source. In fact, the Russians became so fond of the jeep that, according to Doreen Canaday Spitzer, daughter of Willys-Overland Chairman Ward Canaday, they referred to the jeep as the "Ooeelees!" Correspondent Henry Cassidy cabled from the Russian front that "the American jeep has met the Russian mud and the situation is well in hand."

"The Russians early learned the value of our jeeps...They had asked for motorcycle sidecars, but as I wrote Ambassador Litvinov late in January 1942, our own Army was using jeeps almost entirely instead of motorcycle sidecars...The Russians decided to try the jeeps and soon found that our Army had good reason to rely on them...They worked so well in the mire and rough going on the Russian roads that the Red Army quickly asked for more. Since then we have shipped thousands of them to Russia.

"Last year when an Associated Press correspondent visited a Soviet artillery regiment on the central front, he was driven in a jeep through deep mud and across rough fields to the regimental headquarters. Between jounces he turned to the Red Army driver and asked him how he liked the car. The driver answered with one word: "'Zamechatelno!' That is the Russian equivalent for 'swell!'"

Later, Britain's General Sir H. Maitland Wilson, the soldier with the longest continuous service in His Majesty's Army, sent a jeep to Yugoslavia's Marshal Josef Broz Tito. "My representative tells me that the Marshal is delighted with it," General Wilson later recalled, "and was amazed by the performance it put up during his first trip across the very bad roads of that country."

On every fighting front the jeep proved its versatility. Major General Courtney H. Hodges, chief of infantry, called it "the most useful motor vehicle we've ever had." As a troop carrier it took three men easily, six in a pinch. As a reconnaissance car it could go anywhere a cycle could, and a lot more places besides. Fitted with a .30- or .50-caliber gun in the back seat, the jeep became a mobile ack-ack unit. Equipped with a two-way radio together with C-rations and some blankets, it became a mobile command post.

In the island-hopping Pacific war it ran supply convoys along bulldozed tracks from coral beaches to the front line. Equipped with an improvised platform, it slipped through enemy territory in order to evacuate the wounded to forward aid stations. The jeep's low silhouette enabled it to operate closer to the front line than a regular ambulance.

The jeep was outstanding at scattering clusters of planes or hauling some of them away to revetments when an alert was sounded. It could pull a 37-mm antitank gun with comparative ease. It was excellently suited for night patrol work.

At one point, there was a rumor to the effect that a jeep was about to be equipped with a 75-mm gun. Since the quarter-tonner's practical load limit was no more than 800 pounds, the idea of its carrying a 3,900-pound gun was absurd. Yet, the fact that the rumor received wide circulation says something about the confidence the men placed in the stout little machine.

Find out more ways in which the jeep was used in the next section.