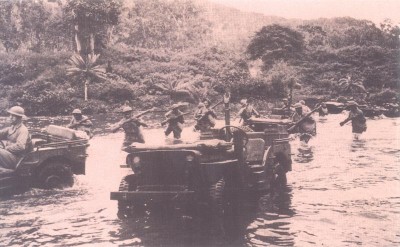 The 1942-1944 jeeps proved successful for the U.S. Army in World War II battle. Yet jeeps had proven their worth in battle all across the globe even before the Japanese attacked Pearl Harbor on December 7, 1941.

The speed and ease with which German troops were able to sweep through the low countries -- Belgium, Holland, Luxembourg -- and on into northern France was a stunning blow to the Allies. Commencing on May 10, 1940, the Nazi forces moved so rapidly that within 16 days British and French troops had been driven almost into the sea.

Had it not been for the remarkable evacuation at Dunkirk, thousands of Allied troops would have surely been captured. On June 14, the Germans occupied Paris; eight days later France fell. For all intents and purposes, Britain stood alone, facing the advancing Nazi war machine.

President Franklin D. Roosevelt was more acutely aware than most Americans of the gravity of the situation -- especially regarding our own national security. So, on June 10, he pledged that the United States would "extend to the opponents of force the material resources of this nation." America had become, in Roosevelt's words, "The Arsenal of Democracy."

By the following March, "Lend-Lease" had been authorized by Congress, providing war materiel such as airplanes, tanks, and trucks, along with food and other supplies and services. The primary recipient was Britain, though the program was soon extended to China, and then, in September, to the Soviet Union. The legislation allowed the President to accept repayment "in kind or property or any other direct or indirect benefit that the President deems satisfactory." Of course this meant much of the total -- which eventually exceeded $49 billion -- was actually an outright gift; though, the Allied nations gave U.S. troops stationed abroad some $8 million in "reverse Lend-Lease."

Of all the items of equipment supplied to the Allies under the Lend-Lease program, none was more enthusiastically received than the jeep. On September 19, 1941, American diplomat W. Averell Harriman and his British counterpart, Lord Beaverbrook, were sent to Moscow to confer with Russian dictator Josef Stalin. The purpose of their meeting was to discuss further supplies and equipment that might, under the Lend-Lease program, be placed at the disposal of the Soviet Union.

In stark contrast to the cordiality he had manifested on an earlier, similar occasion, Stalin was curt, blunt, even rude. Harriman, the quintessential diplomat, reviewed for Marshall Stalin an impressive list of goods and services that the United States and Britain were prepared to supply to the Soviets, who at the time were locked in a desperate struggle against the advancing German Wehrmacht.

Stalin remained unimpressed, almost hostile. Finally, running down his list, Harriman came to what was obviously the key item: 5,000 jeeps.

Old Joe Stalin's eyes lit up. "Good!" he is reported to have exclaimed. "But I want more. This is a war of motors. It is impossible to have too many of them, and the side having the largest number of motors is bound to win."

Find out the Russian Army's reaction to the jeep, and learn more about the jeep's versatility on the next page.