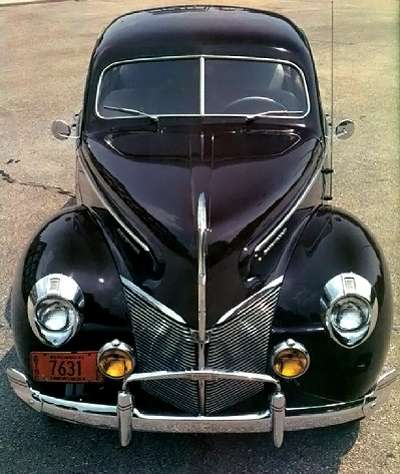 Ford Motor Company entered the medium-priced field for the first time with introduction of the Mercury Town Sedan in late 1938. Mainly the inspiration of Henry Ford's only son Edsel, the new make was conceived as a "super deluxe" Ford to fill the big price gap that had long existed in the firm's product line.

Styled by Bob Gregorie, the first-year 1939 models looked much like that year's Fords but rode a four-inch longer wheelbase (116 inches), were somewhat heavier, and used an enlarged version of the familiar Ford flathead V-8 producing 95 instead of 85 horsepower.

The Town Sedan had a 116-inch wheelbase.

Offered in four body styles, Mercury proved a hit in its inaugural year and would go on to be a mainstay at Ford Motor Company.

The Mercury was offered in four body styles.

Our feature car is one of the follow-up 1940 models, which were much the same as the 1939s aside from a minor but effective facelift done in the manner of the ever-popular 1940 Fords.

There was plenty of leg room available for passengers in the back seat.

This Town Sedan carried an original list price of $987 and was one of 81,128 Mercurys built for the model year. The rarest and most expensive of the 1940 models was the new convertible sedan, priced at $1,212. Only 1,000 or so were produced.

The Mercury Town Sedan used an enlarged version of the Ford flathead V-8 producing 95 instead of 85 horsepower.

Owner Dan Darling of Elgin, Illinois, found this car in good condition in May 1982 and paid $3,500 for it. The previous owner had resurrected it back in 1968 when he found it resting quietly in a field.

The instrument panel was compact and easy to read.

Darling has invested some $3,000 in it himself, mostly for cosmetic work and a complete undercarriage steaming and painting.

Though the work is not yet quite complete, this car took home nine first-place trophies in the summer of 1983, including a first prize in the Illinois Region AACA show.

The Mercury Town Sedan was inspired by Henry Ford's only son Edsel.

Darling has no other collectibles, but he drives this one regularly during the summer and has added about 3,500 miles to the car's original 62,000. Though he could easily sell it now for $10,000, he probably won't.