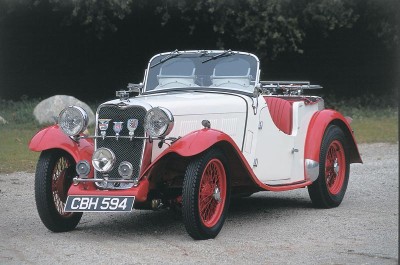 The 1936 Singer Le Mans could travel at speeds up to 90 mph. See more pictures of classic cars.

Count Singer among the many British automobile brands that lasted for many decades, but ultimately faded away. One standout is the 1936 Singer Le Mans, the last year of this racing model.

Founded in 1905 by bicycle manufacturer George Singer, the firm made its first salable car in Coventry the following year. Like most of the rest of the British industry, it had carryover products for a few years after World War II before bringing modernized models to market in the late 1940s.

In 1955, Singer was absorbed into the Rootes Group, then headed down a path of badge-engineered decline until the nameplate was discontinued in 1970.

By all accounts, Singer never had much interest in creating racing-oriented machines (though its cars did turn up in some competitions around the time of World War I). Prior to World War II, it preferred to concentrate on a broad range of more prosaic vehicles. Still, Singer did enter into a flirtation with motorsports in the 1930s that took it to that font of racing greatness, Le Mans.

At the core of the story was the ohc four created for the Singer Junior of 1927-1932. Enlargement of this engine's displacement resulted in the 972cc Nine series (so named for its taxable horsepower rating). Among the cars in the series were the Sports models, a coupe and a four-seat open car on a lowered chassis. These were soon accompanied by a Le Mans 2-seater.

According to The Beaulieu Encyclopedia of the Automobile, "Encouraged by reliable performances in the 1934 Le Mans race, Singer prepared a team of lightweight 2-seaters for 1935." These cars could hit 90 mph, and did well at Le Mans and an event at Brook­lands.

But steering-arm failures sidelined the three team cars in the Tourist Trophy race -- including a crash between two of the Singers -- and the firm ended its racing efforts. (Private owners kept Singers in competition for a few more years, though.) The Nine, including the Le Mans, continued in production until 1936.

Twin SU carburetors helped the Le Mans make 34 bhp (or 38 in the Speed version). With the help of a Moss four-speed gearbox, a Le Mans could hit 75 mph. The two-place roadsters rode a 92-inch wheelbase. The suspension included semielliptical springs all around and friction shocks.

The restored 1936 Le Mans 2-seater Sports pictured above is now owned by Tony Raynor, of Claremont, California. He purchased it in 1996 in "original condition but very worn out."