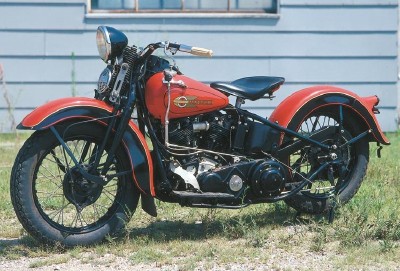 The official introduction of the 1936 Harley-Davidson EL motorcycle was a bit anti-climactic, considering the rampant speculation that preceded it.

Harley dealers got the facts at their annual convention in December 1935, and, although not as wild as the rumors had predicted, the 61-cubic-inch EL nevertheless set new standards for Harley-Davidson -- not to mention the rest of the motorcycle industry.

Most important was the V-twin's switch from a flathead design to overhead valves. Due to the resulting shape of the new rocker covers, the engine was dubbed "Knucklehead" by owners, a nickname by which it is still fondly known today.

Equally significant was the new recirculating oiling system that eliminated the messiness and inconve-nience of the previous "total loss" setup.

Unique to the 1936 EL are the rocker-shaft covers and air intake. The timing case cover was changed three times during the model year, each design a bit smoother than the last.

Fuel tanks were welded and much sleeker than earlier examples, and the tank-mounted instrument cluster started a styling trend that continues to this day.

Despite the efficiency advantages of the EL's overhead-valve arrangement, Harley-Davidson continued to sell flathead V-twin motorcycles for many years to come.

But the EL would go on to become one of the most popular Harley-Davidson models of all time, and its overhead-valve engine established a configuration that has been used for all the company's V-twins ever since.

For more pictures of the 1936 Harley-Davidson EL motorcycle, go to the next page. 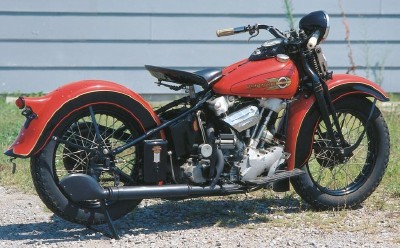 The engine of the EL earned the nickname "Knucklehead," which was inspired by the shape of its rocker-cover caps.

The 1936 Harley-Davidson EL motorcycle introduced changes that would influence the future of motorcycle design. Among them were changes to the rocker-shaft covers and air intake.

The tank-mounted instrument panel, still a Harley styling element, included amp and oil- pressure readouts.
Introduced in 1936, the Harley-Davidson EL went on to become one of Harley's most-popular motorcycles.
The 1936 Harley-Davidson EL offered this
Shift lever well forward indicates this Harley EL
The "fishtail" muffler was another period styling
A real piece of Americana: a 1936 Harley-Davidson
The EL proudly wears its California Highway Patrol badge.
Black and white was a traditional police color; many departments also mounted additional lights.
Evidence, ammunition, or just lunch, saddle bags
Cops appreciated Harley's rugged build, though presence of a rear suspension would have made long hours on the road more comfortable.