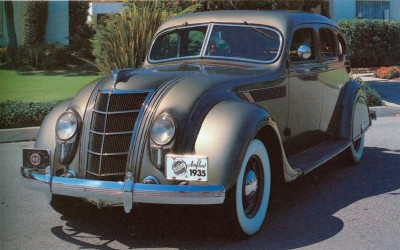 The 1934-1937 Chrysler Airflows were called "the most influential car(s) of the 1930s." And no doubt it was -- but in its own time Airflows very nearly spelled disaster for Chrysler.

It was Carl Breer, one of the "Three Musketeers" of Walter P. Chrysler's great engineering triumvirate, who supplied the inspiration for the project. According to company legend, one day Breer was watching what he took to be a flock of geese in flight. But as they approached he came to realize that what he was seeing wasn't geese; he was observing a squadron of military aircraft on maneuvers.

It was one of those illuminating moments. If the airplane, or for that matter the bird, was shaped in such a way as to minimize wind resistance, could not the same principle be applied, Breer wondered, to ground transportation: to trains, to trucks, to passenger cars? Especially to passenger cars, for by that time (late 1927) some of the better automobiles were capable of speeds as high as 80 or even 90 miles per hour. Breer was just beginning to recognize the handicap posed by wind resistance.

With Walter Chrysler's blessing, work got under way on the development of a streamlined automobile. A wind tunnel was constructed at Dayton, Ohio, and there Breer and his cohorts, Fred Zeder and Owen Skelton, undertook their research under a cloak of secrecy.

By the end of 1932, a prototype was on the road. Dubbed the "Trifon Special" in honor of an engineering laboratory employee, it was a semi-fastback four-door sedan. Carl Breer had originally proposed seating for three in front, two in the rear, but that idea was quickly shot down by the marketing people.

However, many of Breer's other proposals were incorporated into the Trifon Special. For instance, passengers were moved forward 20 inches from their traditional position. This had the effect, first, of reversing the previous weight distribution of approximately 45-percent front, 55-percent rear.

Second -- and even more importantly -- this positioning cradled all the passengers within the axles, largely eliminating the bouncing sensation that had typically been experienced by rear-seat occupants. And finally, it made possible the use of roomy, 50-inch-wide seats.

On the next page, learn about the structure of the Chrysler Airflow. 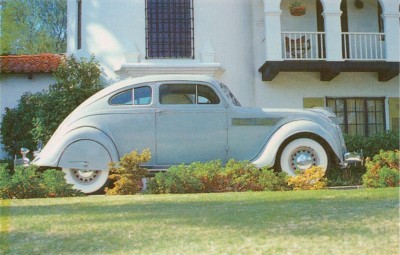 Dampened Enthusiasm for the Chrysler Airflow

Performance was another selling point for the Chrylser Airflow. Out on Utah's Bonneville Salt Flats, a Series CV coupe ran -- the flying mile at 95.7 miles per hour, averaged just over 90 mph over 500 miles, and did 84.43 mph for 24 hours -- ample testimony to the car's durability, as well as its performance.

Initially, the Airflow received an enthusiastic reception. It was the sensation of the auto shows, where visitors are said to have placed orders in record numbers. The press, however, gave the new car mixed reviews. Dr. Klemin pronounced it "Splendid" -- but then, he was hardly an unbiased source.

Carolyn Edmundson, fashion artist of Harper's Bazaar, found the Airflow "breathlessly different-looking," which may or may not have been a compliment, depending upon how one looked at it. Britain's The Autocar gave it muted praise: "The more one sees of [them] the more they are apt to grow on one" And on this side of the Atlantic, MoToR suggested, "Look at the Airflows for two or three days and suddenly they will look right and conventional cars will look strange."

Unfortunately for Chrysler, the public's initial enthusiasm for the Airflow was short-lived. Increasingly, prospective buyers looked, then turned away without giving this radical new car a fair trial. Chrysler loyalists purchased the company's conventionally styled six-cylinder cars; others turned to Oldsmobile, which scored an impressive 128-percent sales gain during 1934. In 1933, 45 percent of all new Chryslers had been, straight eights, but with the coming of the Airflow that figure dropped to 31 percent.

Meanwhile, DeSoto -- with no conventional cars to offer -- was hurting badly. While most of the industry enjoyed a partial recovery that year from the effects of the Depression, DeSoto sales were off by nearly 39 percent.

The best seller among the Airflow Chryslers was the price -- leading Series CU, which rode a 123-inch wheelbase and was powered by a 298.7-cubic-inch, horsepower straight eight. At $1,345, it was priced midway between the "50"and "60" series Buicks.

The CU came in four body styles: four-door sedan (by far the most popular), Town Sedan (with blind quarter panels), Brougham (two-door sedan), and coupe. The last, easily the best-looking of the lot, was a true fastback, with the spare tire enclosed within the trunk; on the other body styles the spare was mounted externally.

The three larger Airflow series all bore the Imperial name. Wheelbases measured 128,137.5, and 146.5 inches, respectively, for the Imperial Series CV and the Custom Imperial CX and CW. The first two used a 323.5-cid, 130-horsepower engine, while the CW, the largest car Chrysler had ever built, employed a 384.8-cubic-inch straight eight rated at 150 bhp. Imperial prices started at $1,625 and ranged all the way to $5,145 for the Series CW limousines-the latter a figure $350 higher than a Cadillac V-12 in the same body style.

On the next page, learn about the Chrysler Airflow's demise. 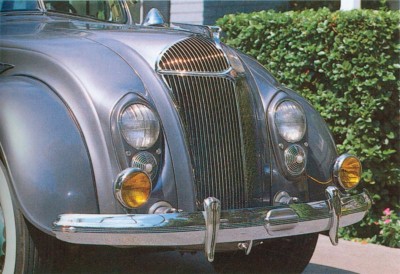