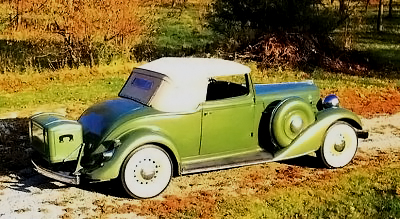 Two steps were provided to get to the 1934 Graham Blue Streak Model 67's rumble seat: one on the bumper, the other just above the taillight. Needless to say, such maneuvers were for the young.
©2007 Publications International, Ltd.

Initially, the DeLuxe Six and Standard and Custom Eights featured a dramatic new instrument panel in which the instruments and controls were placed in front of the driver, instead of the usual location in the middle of the panel.

The extreme left side, center, and right side of the dashboard were decorated in a horizontal, satin-finish chrome appliqué concealing the smoking set, radio, and glove compartment. The steering wheel, gearshift knob, and pull knobs were made of an ivory-colored plastic.

But research by Graham Blue Streak specialist Bill McCall has revealed that only 970 cars were built using this advanced-looking panel before it was replaced (for reasons unknown) by a more conventional, 1933-type dash.

Another 1934 mystery is Graham’s elusive Model 71, a stillborn variant of the Custom Eight sporting a seven-passenger supercharged sedan body mounted over a stretched 138-inch wheel-base. No evidence of its existence, even as a prototype, has yet been found, although prices were published in some sources.

One unfortunate change to the Blue Streak was the addition of an optional $35 “built-in” (add-on, actually) trunk on the sedan bodies, which -- although utilitarian -- diminished the graceful lines. In the company’s defense, many other automakers were offering similar trunks of equal awkwardness, although Graham’s was further marred by truck-like taillights.

Graham’s model lineup was reconfigured several times for 1934, finally consisting of the 85-bhp Standard and DeLuxe Six (Model 68) on a 116-inch wheelbase; the 95-bhp Special and Standard Eight (Model 67) riding the 123-inch wheelbase; and the 135-bhp supercharged Special and Custom Eight (Model 69). (The supercharged Special Eight isn’t generally listed for 1934, although research indicates that some were produced.)

The Model 68 sedan’s longer rear door was again shared with the Eights, while the length difference between the Sixes and Eights was accomplished via longer hoods and running boards. Despite the sedan body machinations, the coupe and convertible bodies remained the same from 1932 through 1935.

Calendar-year production of Graham Blue Streaks increased to 15,745 units, but the new blower didn’t supercharge sales, as production of eight-cylinder cars failed to equal previous years. And Graham looked briefly at small cars in 1934, examining and rejecting a plan to take over production of Continental’s diminutive four-cylinder Beacon.

Continue to the next page to learn what 1935 had in store for the Graham Blue Streak.