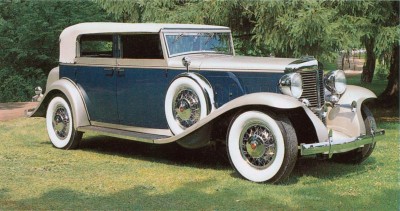 The Marmon Sixteen rode a 145-inch wheelbase, three inches shorter than Cadillac's. And due to extensive use of aluminum, the Marmon weighed about 500 pounds less. See more classic car pictures.
©Milton Gene Kieft

For years the 16-cylinder automobile has been identified in the public's collective mind exclusively with Cadillac. But there was another fine Sixteen back in the early Thirties: the Marmon.

The 1931-1933 Marmon Sixteens were fine automobiles, and in a number of respects, superior to the Cadillac. That fact was duly recognized at the 1932 New York Automobile Show when the Society of Automotive Engineers declared the Marmon Sixteen engine to be "the year's most noteworthy automotive accomplishment," an honor that Cadillac has yet to receive.

Marmon had been building automobiles ever since 1902, when Howard Marmon, the company's vice-president of engineering, constructed an air-cooled V-2 for his own use.

The second Marmon, built the following year, ran with a V-4. Half a dozen of these cars were built and sold that season, mostly to friends of Howard Marmon and his older brother, Walter. Production rose to 25 cars in 1905, and a one-off V-6 was also built that year. By 1906, Marmon had come up with a big 65-horsepower, air-cooled V-8. It was a pioneering effort, produced nearly nine years before the first Cadillac V-8, but it failed to get beyond the prototype stage.

In 1909, a pair of conventional water-cooled, T-head, four-cylinder Marmons made their debut. One of these, the Model 32 -- a very advanced car for its time -- would remain in production as the company's mainstay as late as 1914. In all of these early cars, Howard Marmon insisted upon two characteristics: light alloy construction and perfect lubrication. While virtually all of Marmon's competitors clung to the old dipper-and-splash method, the Model 32 featured a gear-driven oil pump with pressure delivery to all bearings.

A major boost to the Marmon reputation for performance came with the introduction, in December 1915, of the Model 34. This car was powered by a highly advanced overhead-valve six. Displacing 339.7 cubic inches, it developed 74 horsepower. Block and crankcase were an integral aluminum casting, something virtually unheard of at that time. Pistons, intake manifold, pushrods, even the water pump were made of aluminum alloy. Iron was used only for the head and cylinder liners.

Nor was the use of aluminum confined to the engine. The transmission case and differential housing, plus the body, hood, and even the fenders were made of lightweight aluminum alloys. As a result, the Model 34 weighed in some 700 pounds lighter than the contemporary Cadillac, giving it a substantial performance edge. It was also the more expensive of the two. In 1916, for example, the Model 34 Marmon touring car sold for $2,900, while a Cadillac in the same body style could be purchased for $2,080.

On the next page, get more information regarding the evolution of the Marmon Sixteen.

The Evolution of the Marmon Sixteen 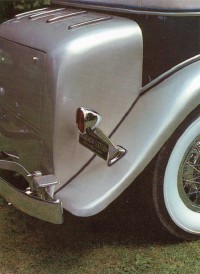 The Marmon Sixteen sported free-standing taillights, and this '32 Convertible Sedan is fitted with an add-on exterior trunk.
©Milton Gene Kieft

Competitors predicted problems would arise with Marmon's aluminum engine block, for aluminum was known in those days as "the trouble metal." Unfortunately, they were correct, so for 1920 an iron engine was used, cast in two blocks of three cylinders each. But Howard Marmon retained his faith in the lighter metal, and kept working on ways to make its use more practical. Eventually his efforts would bear fruit, but that success would not come for another decade.

The automobile operation was really a sideline at Marmon in those days. The company's principal source of revenue came from the manufacture of milling machinery, a field in which Marmon was probably the leader. And a good thing, too, for the cars were not selling well.

In 1924, the automobile business was spun off and a new management team, headed by George M. Williams, was called in. Williams, with an eye to the volume market, hired Delmar G. "Barney" Roos, formerly chief engineer at Pierce-Arrow, to design a medium-priced straight eight. Howard Marmon, who took a dim view of any product that fell short of his own meticulous standards, withdrew at that point from active participation in the firm.

Which is not to say that the Little Marmon, as the new model was called, was a bad car. It was probably at least as good as competing machines in its under-$2,000 price field. But it clearly was not comparable to Marmons of yore -- nor to the current Model 74, successor to the Model 34.

Meanwhile, Howard Marmon was by no means idle. Working in his own laboratory, he devoted much of his energy to the fulfillment of a long-held dream: the development of what would eventually be billed as "The World's Most Advanced Motor Car," the Marmon Sixteen.

Observe, by the bye, that Howard Marmon never referred to his car as the "V-16" the way Cadillac did. It was simply the Marmon Sixteen. Still, in concept the Marmon and Cadillac engines had much in common. Both were comprised of two straight-eights fitted to a single crankcase. In both cases the cylinder blocks were located at an of 45 degrees to one another, which in a 16-cylinder engine guaranteed an even firing order. Both employed full-pressure lubrication, overhead valves, dual exhausts, and six-volt electrics.

But there were major differences as well. While the Cadillac used cast iron exclusively, the Marmon engine featured aluminum alloys throughout, including the cylinder blocks, resulting in a considerable savings in weight.

To allay any anxiety on the part of the public, Marmon advertisements proclaimed, "Casehardened, file-hard steel cylinders are used" -- meaning, of course, the cylinder liners. Howard Marmon's long years of research had paid off: the new engine could claim all the advantages of aluminum construction with none of the penalties experienced with the early Model 34.

And there were other distinctions. The Marmon, for instance, used rubber engine mountings. Its cylinder blocks and crankcase were a single casting, while Cadillac cast the three pieces separately. Comprised of an alloy of aluminum and copper, the material used by Marmon was developed by a Pennsylvania foundry.

And in lieu of offset engine blocks, which made possible Cadillac's use of side-by-side connecting rods, Marmon used the more costly fork-and-blade arrangement.

Like the Cadillac, the Marmon engine was based on a four-inch stroke. But the Marmon's 3-1/8-inch bore was an eighth of an inch greater than that of the Cad, resulting in a slight advantage in displacement: 490.8 versus 452.8 cubic inches. The Marmon's compression ratio-highest in the industry at that time-was 6.00:1, compared to the Cadillac's 5.50:1, and its duplex downdraft carburetor was more efficiency than its rival's dual updrafts. Taken together, these factors gave the Marmon a 35-horsepower advantage: 200, compared to 165 for Cadillac.

Keep reading to learn more about the Marmon's performance. 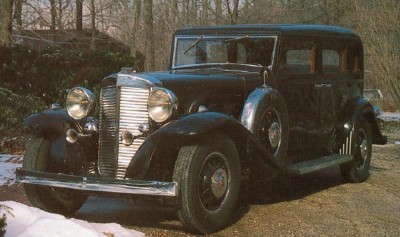 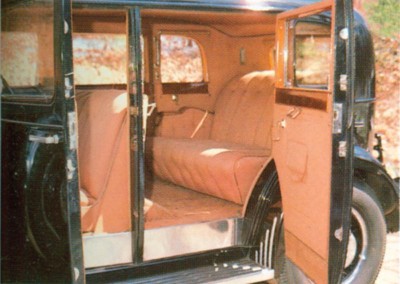 The Marmon Sixteen's interiors were as elegant as one would expect. Only the finest materials were used, as on this elegant 1933 five-passenger sedan.
©Milton Gene Kieft