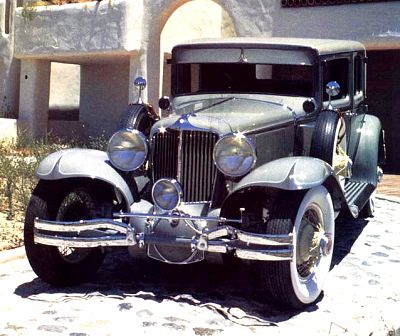 Heard the one about the used-car salesman from Los Angeles? We're not talking about "Madman" Muntz but rather Errett Loban Cord, remembered today for three Classic-era greats: the Auburn Speedster, Model J Duesenberg, and the first car bearing his own name, the front-drive 1929-1931 Cord L-29.

Intended to fill the price gap between the Auburn Eight and the mighty J in Cord's mini auto empire, the L-29 was engineered by Cornelius Van Ranst along principles patented by famed race-car designer Harry Miller. Front drive was still in its infancy, but Cord wanted it to achieve a low, rakish appearance.

The 298.6-cubic-inch Lycoming straight eight was plucked from the largest Auburns and turned back to front for the Cord, with the clutch, three-speed sliding-pinion gearbox, and differential strung out ahead. This layout dictated a mile-long hood, to which stylist Al Leamy added a Duesenberg-like radiator.

As a result, the 137.5-inch-wheelbase L-29 was sensationally long and low. Body styles comprised four-door sedan, brougham, and convertible, and a rumble-seat cabriolet.

But the L-29 was seriously flawed. The near 21/2-ton curb weight and only 125 horsepower made performance marginal, and the engine placement's resulting rearward weight bias left the front wheels scrabbling for traction on slippery uphill grades. Handling was twitchy, and the constant-velocity U-joints in the front halfshafts wore out with merciless frequency.

But the real problem was price. At $3,095 or $3,295 depending on model, the L-29 cost more than its faster, more refined rivals, and the conservative buyers in this market were wary of new ideas like front drive. An $800 price cut failed to spark interest, and the car disappeared in early 1932. A mere 4,429 had been built since mid-1929.

The Cord L-29 was available in four-door sedan, brougham, and convertible, as well as a rumble-seat cabriolet. Featured is a close-coupled brougham.
pil

The Cord L-29 featured is a prime example of the close-coupled brougham sedan, owned by Ken and Jan Findiesen. Like most such Classics, it's virtually priceless.