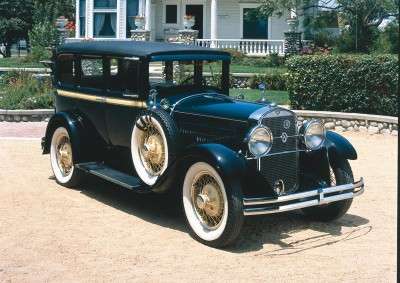 Staid Studebaker would have to loosen up with the Jazz Age by creating the 1928 Studebaker President. First, the uninspired model names Big Six, Special Six, and Standard Six were replaced by President, Commander, and the dubiously dubbed Dictator during 1927.

Then, Stu­debaker's ambitious head, Albert Erskine, wanted to build "the finest eight-cylinder car in the world regardless of cost." With the President Eight, he created an upper-medium-priced car that could challenge the luxury cars for power, comfort, and style.

The new eight was ready for 1928. Designed under the direction of Barney Roos, the 313-cubic-inch L-head engine produced 100 horsepower, but was enlarged midyear to 337 cubic inches with horsepower upped to 109.

Studebaker's Big Six held several speed and endur­ance records, and the company wanted to prove the new eight was even better. Two President sedans (similar to the car featured) and two roadsters were driven to the Atlantic City Speed­way, a board track in New Jersey.

The strictly stock cars circled the track for 20 days. At the end of the run, each car had covered 30,000 miles at average speeds of 63 mph for the slowest sedan and 68 mph for the fastest roadster. The American Automobile Association supervised the test and confirmed the only engine maintenance was a change of spark plugs and replacement of a fan belt.

Combined with previous tests, Studebaker held 114 stock-car records -- some of which stood for 35 years. Studebaker mounted its new engine in a long 131-inch-wheelbase FA chassis and a shorter 121-inch FB version. With attractive styling and luxurious interiors, the Presi­dent was a success: More than 16,500 cars were sold in 1928. Today, the 1929-1933 Presi­dent is the only Studebaker recognized by the Classic Car Club of America. Our featured 1928 President five-passenger sedan, owned by Brian McLaugh­lin, of Yorba Linda, Califor­nia, is similar to the 1929 model, but inexplicably is not accorded Classic status.

Mr. McLaughlin's Uncle Ray purchased the car in 1950 for $500 and a rifle. Ray McLaughlin completed its restoration in 1967. The original mohair upholstery lasted until 2002.