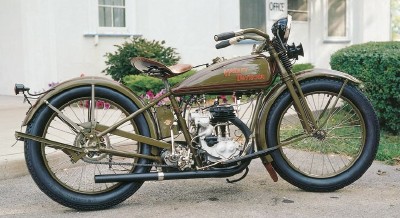 The 1927 Harley-Davidson BA motorcycle was an attempt by the growing Wisconsin company to offer an economical single-cylinder model that still retained some of the legendary Harley power.

However, competition versions, known as "pea-shooters" due to the sound of their exhaust note, claimed many victories at the hands of Joe Petrali during the same period.

Two versions of the single were offered: a flat-head with eight horsepower and an overhead-valve variant producing twelve horsepower -- an impressive 50-percent increase.

Yet the flathead sold better due to its lower cost and easier maintenance. Both could be fitted with electric lighting like the flathead shown.

America's preference for big, powerful twins led to the demise of these single-cylinder models in the mid 1930s.

Harley continued for a time with a larger 30.5-cubic-inch single and made several later attempts at selling single-cylinder machines, but it was always V-twins for which the company was best known.

Continue to the next page for more pictures of the 1927 Harley-Davidson BA motorcycle. 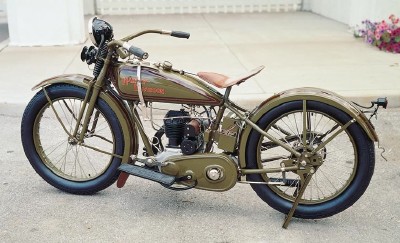 The BA was one of several single-cylinder models that had disappeared by the mid-1930s.

The 1927 Harley-Davidson BA motorcycle featured a 21-cubic-inch single-cylinder engine. The resulting lack of power negated the need for front brakes.

There was a lot of working room around the little 21-cubic-inch flathead single, which was a selling point in the late 1920s.
"Big bike" features included leading-link front forks and three-speed transmission.
Electric headlights had largely replaced acetylene systems by 1927.
The BA's external-band rear brake was sufficient for the bike's modest speed potential.