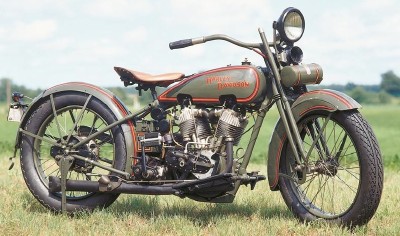 It enjoyed major technological advancements, but the 1925 Harley-Davidson JD was offered only in a drab olive-green color. See more motorcycle pictures.

With the 1925 Harley-Davidson JD, the venerable motorcycle company made great strides in modernizing its machines -- at least from the standpoint of styling.

A new frame placed the saddle three inches lower than before, wider but smaller-diameter tires gave the bike a huskier look, and the fuel tank took on a rounded teardrop shape. Color choices, however, remained the same as they had since 1917: anything the customer wanted, as long as it was Olive Drab.

The shift lever was moved farther forward along the side of the tank for convenience, and a fork-mounted tool kit made a debut appearance.

Sidecars were popular accessories of the day, as these vehicles often served as a family's primary form of motorized transportation.

The first of Harley's famed 74-cubic-inch V-twins was introduced in 1922 and continued with only minor changes through 1928. Some of those minor changes occurred in the JD: Iron alloy pistons replaced the previous aluminum slugs, and 16 Alemite fittings were added to the engine and gearbox to ease lubrication.

Go to the next page for more pictures of the 1925 Harley-Davidson JD motorcycle. 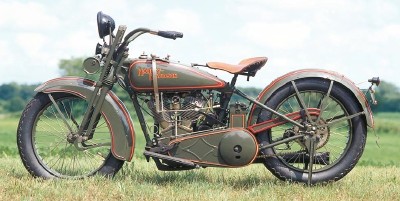 Changes for the 1925 Harley-Davidson JD included a new contoured seat, as well as a change in location for the shift-lever.

Sidecars were common at the time, as motorcycles were often relied on as family transportation.
The famous 74-cubic-inch V-twin Harley engine.
A new contoured saddle added comfort for appreciative riders.
The shift-lever was placed beside the fuel tank.