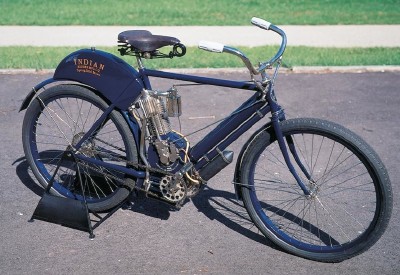 The 1904 Indian motorcycle used a reliable direct-drive chain as opposed to the more common leather belt.

The 1904 Indian motorcycle grew out of a chance encounter at a bicycle race in the early 1900s.

Oscar Hedstrom had mounted a single-cylinder De Dion engine on a tandem bicycle for the purpose of pacing then-popular bicycle races.

George Hendee, a bicycle manufacturer from Springfield, Massachusetts, saw the contraption at an event and proposed a cooperative effort to produce motorized bicycles commercially.

Hedstrom agreed, and in 1901 the Indian Motorcycle Company was born. Most pre-1910 motorcycles look as though the manufacturer simply bolted an engine and its accessories onto a common bicycle frame -- which indeed was usually the case.

But early Indians used the engine as a stressed frame member, effectively replacing the downtube beneath the seat.

As with most motorcycles of the era, suspension was non- existent (save for the spring-mounted seat), and pedals were used to start the engine.

However, Indian used a direct-drive chain rather than the more common tensioned leather belt to turn the rear wheel, the chain being more positive in operation -- and more reliable.

This 1904 'humpback' is little different than the first 1901 models. Producing just over two horsepower, the 13-cubic-inch single provided a top speed of around 25 mph.

Both the lubrication and ignition system were of the 'total loss' variety. Braking was accomplished by backpedaling, which activated a rear coaster brake.

Dark blue was the color of choice until 1904, when black and vermillion became optional. The vermillion would later be known as 'Indian Red.'

See more detailed photographs of the 1904 Indian motorcycle on the next page. 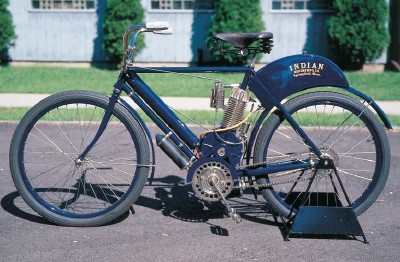 The engine and brakes are triggered by pedaling.

One of the earliest motorbikes, the 1904 Indian functioned much like a standard bicycle. Forward pedaling started the motor, and backpedaling triggered the rear brake.

The 1904 Indian was known as a "humpback" because of the shape of its gas tank.
The engine was designed as part of the frame.
Dark blue was the original color for the first Indians.