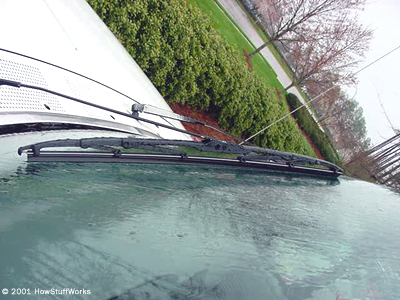 This wiper blade is supported in six places for an even pressure distribution against the windshield.

Wiper blades are like squeegees. The arms of the wiper drag a thin rubber strip across the windshield to clear away the water.

When the blade is new, the rubber is clean and has no nicks or cracks. It wipes the water away without leaving streaks. When the wiper blades age, nicks or cracks form, road grime builds up on the edge and it doesn't make as tight a seal against the window, so it leaves streaks. Sometimes you can get a little extra life out of your wiper blade by wiping the edge with a cloth soaked in window cleaner until no more dirt comes off the blade.

Another key to streak-free operation is even pressure over the length of the rubber blades. Wiper blades are designed to attach in a single point in the middle, but a series of arms branch out from the middle like a tree, so the blade is actually connected in six to eight places. If ice or snow forms on these arms, it can make the distribution of pressure uneven, causing streaks under part of the blade. Some wiper manufacturers make a special winter blade with a rubber boot covering the arm assembly to keep snow and ice out.

Some of the different wiper blade schemes used by various cars

There are a couple of other designs on some cars. Mercedes uses a single wiper arm that extends and retracts as it sweeps across the window -- Single Arm (Controlled) in the figure above. This design also provides good coverage, but is more complicated than the standard dual-wiper systems. Some cars use wiper blades that are mounted on opposite sides of the windshield and move in the opposite direction, and some vehicles have a single wiper mounted in the middle. These systems don't provide as much coverage for the driver as the standard two-blade system.