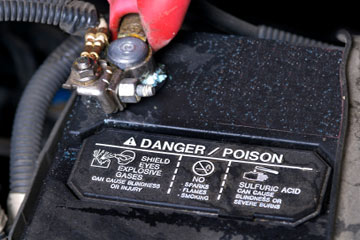 Treat your battery as a dangerous and toxic object that requires respect and caution and you shouldn't have any trouble changing it.
©iStockphoto.com/dlewis33

Finally, we get to the good part: removing the old battery. Remember that this is the most dangerous stage in the replacement process. Cracks and corrosion in the old battery can allow acid to leak out onto your skin, which can be unpleasant to say the least. While the car's ignition is off, the battery can still produce an electrical charge (and even an explosion) while the terminals are connected. In other words, be very careful while removing the battery.

To start, loosen the nut from the bolt that holds the terminal cable to the negative post on the battery. Use your wrench or pliers to turn the nut in a counterclockwise direction. Hold the bolt head in place using another pair of pliers or wrench. Once loose, carefully slide the end clamp from the post. When you do, be sure you have already placed your tools on the ground or on your Styrofoam tray to prevent sparking an electrical charge.

Once the cable connected to the negative terminal post has been safely removed, follow the same steps for the positive terminal.

Now that both terminals are loose, it's time to unfasten any plate that holds the battery in its seat. Most likely, you'll encounter the same sized nut as the ones found on the terminal cable clamp or a wing nut you can unscrew by hand. Once it's loose, you can now safely remove the battery. Remember, it can be heavy, and you'll likely be hunched over it; be sure to lift with your knees. Lift it straight up -- most batteries come with a handle attached for easy carrying -- and then out and onto the ground. If the handle has corroded, carefully lift the battery by its sides. Be careful not to allow any acid to spill out.

With the battery safely away from the car, use your battery terminal cleaner to brush out any remaining sulfate from inside the terminal cable end clamps. Check the cables to make sure they're not corroded. If they are, pick up some replacement cables at the auto parts store. Apply a coating of corrosion protection spray to the cable end clamps to protect from future deposits from accumulating on your new battery.

Now you're ready for the last step, installing the new battery.