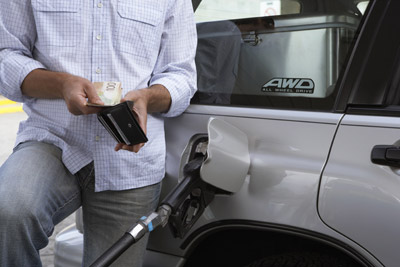 A lot of energy (and money) is wasted by simply carrying fuel.
Noel Hendrickson/Getty Images

Few experts would argue with the idea that the biggest problem with modern cars is weight. According to the Environmental Protection Agency (EPA), each 100 lbs. (45.36 kg) removed from a car can increase fuel mileage by 1 to 2 percent. The exact number depends on the size of the vehicle and its engine -- the smaller the car, the more dramatic the increase in fuel mileage. Now, 1 to 2 percent might not sound like a lot, but it adds up. If you could remove 2,000 lbs. (907.2 kg) from a car, you might increase your mileage by up to 40 percent. But the benefits don't stop there. If a car is designed from the ground up to be approximately one ton lighter, it won't need a big engine to get the same performance. The heaviest part of the any car is usually the engine block, so if you can use a smaller engine, you're saving even more weight. On top of all that, you won't need to carry around as much fuel, since that smaller engine will burn less. A gallon of gas weighs about 6 lbs. (2.72 kg). If you have a 20 gallon (75.69 liters) fuel tank in your SUV, you burn a lot of fuel accomplishing nothing but carrying around fuel. Once you make a car significantly lighter, you can reduce the weight of many components, including the brakes, suspension and even the tires [source: USA TODAY].

The inefficiency doesn't end with weight, though. Many modern cars have air-conditioning systems that are far more powerful than they need to be for the small enclosed space they are designed to cool. In addition to extra weight, they draw a significant amount of power from the engine.

Tires are another energy sore-spot. Most tires aren't designed to minimize rolling resistance, which means the engine has to push even harder to move the car. Sidewall flex in the tires wastes even more energy. And every time you hit the brakes, a large amount of energy is dissipated as heat. You guessed it -- more energy loss.

Finally, while many vehicles do have aerodynamic body shapes, not every car has an optimal aerodynamic profile. If wind resistance doesn't seem like a big deal, think about how much force pushes back on your hand when you stick it out the window of a moving car. Now imagine that force pressing against the entire front surface of the car.

What's the net effect of all this inefficiency? Let's use a basic example -- how about your typical drive to work? All you need to accomplish is moving yourself from one point to another, along with maybe a briefcase or lunchbox. Yet, on the drive there, you're also hauling about two tons of steel along with you. According to Amory Lovins, 90 percent of the energy generated by the engine in your vehicle never even makes it to the wheels, because most of it is lost as heat as the engine and drivetrain parts rub together. Ultimately, only 0.3 percent of all the power your engine puts out is actually used to move your body [source: AutoblogGreen].

Now that you know which parts of our cars are wasting energy, you can go about designing cars that do better. Find out how on the next page.

If there is a single spearhead for the hypercar movement, it's Amory Lovins, an unassuming engineer, environmentalist and recipient of a ­MacArthur Fellowship. Lovins' energy use philosophy is simple: The United States needs to reduce overall energy consumption. His Rocky Mountain Institute (RMI) is a think tank devoted to developing test-bed technologies in hopes of leading major companies down a more energy efficient road. In recent years, an RMI spinoff company called Hypercar, Inc. became Fiberforge, a company focused on the development of inexpensive mass-producible carbon fiber [source: The Wall Street Journal].

A negawatt is a hypothetical unit of energy that was never generated. It represents an increase in efficiency. Some hypercars could take the concept a step further. Hybrid hypercars can use regenerative braking to increase the charge in the onboard batteries. The high efficiency of the car means you might finish your trip with extra juice in the batteries. That's when you would plug your vehicle into an outlet. Instead drawing power to recharge the batteries, you allow the power from the batteries to flow into the grid. Your electric meter tracks how much you put back into the system, and the electric company pays you at a specified rate in the form of an electricity discount, or a check, if your house is efficient enough to have overall negative energy use.