How the GMC PAD Works 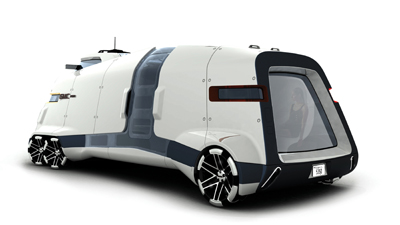 GMC has come up with a solution to the rising costs of gas and rent -- the GMC PAD. Created for the California Design Challenge, the PAD is a mobile urban loft intended to ease the difficulties of living in Southern California. This six-wheeled behemoth is basically a futuristic motor home -- part apartment, part vehicle and part telecommunications center

The GMC PAD is based on the idea of a mobile urban loft -- a one-room apartment meant for one person, or two if they don't mind being extremely close to each other. Instead of renting from a landlord and paying the often sky-high SoCal rent rates, the owner of a PAD just lives in it, and makes his home wherever he happens to be parked. To get to work, the PAD owner just parks his "mobile urban loft" near the office and walks, avoiding the necessity of commuting on clogged highways. Better still, he can use the PAD's on-board technology to work directly from within the PAD itself. The PAD is a high-tech motor home made for living in full-time, not just for weekend trips. It's packed with the latest communications equipment and amenities, which is why GMC calls it a Living Activity Vehicle, or LAV.

The GMC PAD doesn't actually exist, however. General Motors' Advanced Design Team created it for the California Design Challenge, a contest held at the 2006 Los Angeles Auto Show. The theme for the challenge was "An L.A. Adventure." Ten different companies, including Hyundai, Scion, Maybach, Mercedes-Benz and Audi, came up with concepts to reflect the wide variety of activities available in Southern California.

A panel of design experts gave first place to the GMC PAD. Tom Matano, a panel judge and director of Industrial Design for the Academy of Art University, called the PAD "the true all-around vehicle. This creates a new segment between the RV and the SUV. The future of this Living Activity Vehicle would appeal to many buyers including corporations, future homeowners, traveling business people and constant travelers looking to go beyond the stereotypical RV" [ref].

Statistics about the PAD are hard to come by, since it only exists as a computer design. It is comparable in size to a modern motor home -- in fact, it's probably shorter than some of the huge motor homes on the market. It looks very wide, but for practical purposes, it can't be any wider than a standard traffic lane. Specific weight numbers are not available, though it would likely be comparable to a standard motor home. A 25-foot motor home weighs about 10,000 lbs. and uses a 300-horsepower engine. Space-age materials such as composites could reduce the weight, but the weight of the communications equipment could compensate for that savings.

The PAD includes DirecTV, OnStar and XM Satellite WiFi. That means users would have constant access to more than a hundred TV channels, high-speed wireless Internet, and a variety of OnStar services, including vehicle diagnostics, emergency assistance, and traffic, travel and weather information.

You wouldn't have to work very hard to find that information, either. The interior walls of the PAD are covered with giant LCD screens. To keep everything running smoothly, GMC says that the PAD has "a teraflop of on-board memory." This doesn't make much sense, since a teraflop is a measure of computational speed rather than memory capacity. Perhaps the PAD has on-board computer systems that can run at one teraflop. Or they may have meant "terabyte." On the other hand, maybe the PAD can make the Kessel Run in under 12 parsecs, too.

If kicking back and watching a DVD on a giant LCD screen isn't relaxing enough, the aft portion of the PAD is a "personal spa." This includes a kitchen area with a "full suite of PAD-specific appliances created by Thermador," and other features created by Kohler. Whether this includes a working shower and bathroom isn't indicated, but we can assume they're there. The integrated skydeck allows the owner to "enjoy the sights and sounds of LA culture."

Saving on a monthly rent payment is no big help if you're stuck paying hundreds of dollars for gas every week. For that reason, PAD was designed to operate efficiently with the latest energy technologies. A Diesel-Electric hybrid engine powers the PAD in both LiveMode and DriveMode. A fully computerized resource management system allows the PAD to wring every last drop out of fuel and potable water supplies, with the projected time between refills lasting weeks or months. To supplement energy demands, six square meters of photovoltaic cells cover the top of the PAD, charging on-board batteries with energy collected from the sun. The computers also control the suspension, giving the PAD a smooth, easy ride and leveling it out automatically in LiveMode.

Because the PAD was created purely as a design project, it isn't necessarily meant to be a realistic vehicle. GMC has absolutely no plans to produce a prototype PAD, much less a production version for sale to the general public. But what would the GMC PAD be like if it did exist?

It would probably cost a bundle, for one thing. New high-end motor homes can cost in the range of $800,000 to $1 million, and models that are more modest can still reach $250,000. The PAD is certainly a high-end machine, with its "infotainment" gadgets, LCD screens, solar cells and hybrid engine. At minimum, its price would have to be a few hundred thousand dollars. You'd have to live in it for many years to make up that difference in rent savings, and that doesn't take into account fuel costs or considerations about where you'd park your PAD. Motor homes aren't generally allowed to stay long-term in parking lots or parked on the street, and connections to fill up the water tanks aren't free, either. None of these concerns are addressed in the PAD design document.

The general idea of living in a motor home instead of a house is not a new one, but if prices in some real estate markets continue to rise, that might be the only choice left for some people. However, living in a motor home is not easy. It requires some ability to repair the mechanics and systems of the vehicle. It also requires adherence to a strict budget for food, fuel and other expenses. The living space in the PAD as shown would be very cramped. It looks more like a fancy lounge than somewhere you'd actually want to live. So the PAD wouldn't be for everybody, but for those who desire a new lifestyle and like to live on the cutting edge, the PAD might be a glimpse into the future.

There are other options for the PAD, however. GMC considers its adaptability and modular design a plus that could allow it to be used as the on-the-spot headquarters for a disaster response team, an on-site office for managing events or construction sites, or as emergency housing.

For more information on the GMC PAD and related topics, check out the links on the next page.