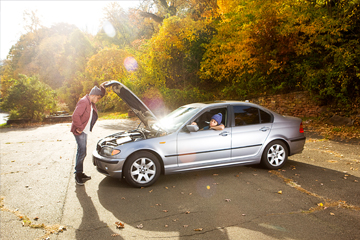 Your car might not be designed to fail, but it is designed to be undesirable compared to the latest and greatest.
Tooga/Getty Images

Car manufacturers use a bunch of tricks to disguise planned obsolescence. For example, have you ever taken your car in for a fairly simple repair, only to find out that the dealership's service center no longer stocks the part you need, and they say that part will never be made again? It makes sense, at some point, for manufacturers to stop making unusual parts for really old cars; but basic items, especially those that are used in a bunch of different models, should ideally be available for a really long time. The dealership might be trying to send you a message that it's easier, and maybe even cheaper, to buy a whole new car than to keep hunting for parts for your old one.

Subtle appearance and equipment upgrades are another way that car manufacturers mess with your minds. The car you bought last year isn't obsolete just because this year's model has a sparkly new paint color and expensive-looking LED headlights. But they're sending you a signal. Yours is old. Sure, it still works great ... but it's just going to keep getting older.

To be fair, planned obsolescence isn't unique to the auto industry. Just look at tech, like smartphones and computers, for a really good example. The fashion industry is another. A classic Chanel suit might be wearable forever, but generally, clothing trends are recognizable as "old," prompting consumers to upgrade even if they're still wearable. The point is, planned obsolescence is strategic. Clothes go out of fashion, based on the clothing designers' and retailers' own definition of what is in fashion. And when a car dealership sells you that new car, they already know what will be on the lot when you're bringing your car in for its 30,000-mile service. The car manufacturer has planned a great new engine for next year's model, and a whole new generation just two years from now. Your car will still work, sure. But they're hoping you'll be persuaded to trade-in and upgrade.

All that said, of course, planned obsolescence doesn't necessarily mean your car is designed to fail. It's just designed to be unfashionable and undesirable compared to the latest and greatest. Plenty of parts and components have a certain usable life, at which point they'll need to be replaced. Maybe it's planned to some extent, but the reality is, metal and plastic and rubber simply don't last forever. If you take the worn widgets out and put fresh widgets in, it'll keep on chugging. As we already mentioned, it's the availability of the widgets that's eventually a problem when it comes to older cars. People do it, though, so it's possible. And, as a counterpoint, planned obsolescence isn't all bad. Without it, there would be little incentive to innovate and improve. That's why styling is such a big part of planned obsolescence in the auto industry; our high-quality modern vehicles will still be road-worthy long after they're trendy.