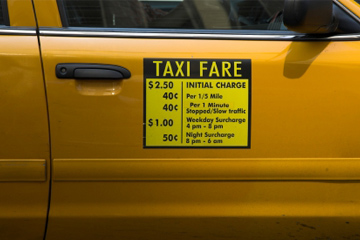 Some areas have other surcharges that are added to your time and distance charges. The cab driver enters those additional fares on the meter.
©iStockphoto.com/Graeme Purdy

No matter what, you know you're going to get charged for the time you spend in a cab and the distance you travel; however, some areas have other fares that are added to your time and distance charges. The cab driver enters those fares on the meter itself.

The most common fare type is a simple pickup fee. In the New York City example we mentioned on the previous page, it costs $2.50 just to get into a cab. If you get a cab in New York between 4 and 8 p.m., you'll get charged an additional peak-hour surcharge of $1.00. After 8 p.m., there's a night surcharge of 50 cents. Plus, the passenger is responsible for any tolls, and there's a 50-cent sales tax on each cab ride.

Most municipalities only cover fares within their limits. Generally speaking, if you ask a cab to leave city limits, you get charged a different set of fares. For example, if you catch a cab in New York to go to Newark Airport, you get charged a Rate Code 3: the normal time and distance traveled rate, plus a surcharge of $15. If you take a cab from New York City to Westchester or Nassau Counties, the portion of the trip that's within those counties costs twice as much as the rate in the city. It's 80 cents for every fifth of a mile (0.3 kilometers) or minute of waiting time. New York cabs don't charge for additional passengers, but cabs in Washington D.C. do -- it's $1.50 for an additional passenger. D.C. cabs also charge 50 cents if the driver has to help you with more than one bag.

Most cities require cabs to have all fares posted in the cab, so you can have a good idea of what you should be charged. Of course, that doesn't always stop a very few unscrupulous drivers from trying to take advantage of passengers, particularly if the passengers don't know the area well.