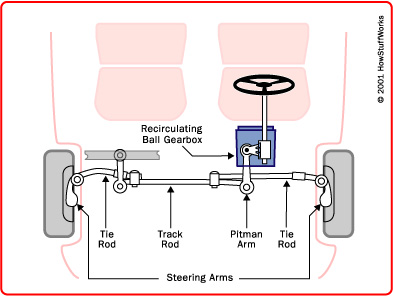 Recirculating-ball steering is used on many trucks and SUVs today. The linkage that turns the wheels is slightly different than on a rack-and-pinion system.

The recirculating-ball steering gear contains a worm gear. You can image the gear in two parts. The first part is a block of metal with a threaded hole in it. This block has gear teeth cut into the outside of it, which engage a gear that moves the pitman arm (see diagram above). The steering wheel connects to a threaded rod, similar to a bolt, that sticks into the hole in the block. When the steering wheel turns, it turns the bolt. Instead of twisting further into the block the way a regular bolt would, this bolt is held fixed so that when it spins, it moves the block, which moves the gear that turns the wheels.

Instead of the bolt directly engaging the threads in the block, all of the threads are filled with ball bearings that recirculate through the gear as it turns. The balls actually serve two purposes: First, they reduce friction and wear in the gear; second, they reduce slop in the gear. Slop would be felt when you change the direction of the steering wheel -- without the balls in the steering gear, the teeth would come out of contact with each other for a moment, making the steering wheel feel loose.

Power steering in a recirculating-ball system works similarly to a rack-and-pinion system. Assist is provided by supplying higher-pressure fluid to one side of the block.

Now let's take a look at the other components that make up a power-steering system.