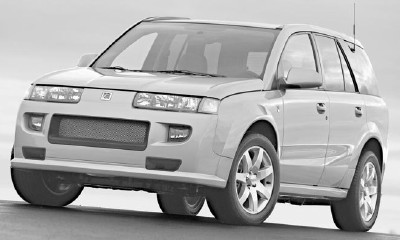 On the heels of healthy sales for the SUV, the Saturn Vue debuted its Red Line version in 2004 as part of a line of performance-oriented Saturns.

The national nightmare of September 11, 2001, was the unforeseen backdrop for the rollout of Saturn's vital SUV, the Vue.

Americans were flocking to car-based "crossover" wagons like the Ford Escape, Honda CR-V and Toyota RAV4. Vue was intended to match or beat them for roominess, versatility, performance, and fuel economy. Significantly, Vue introduced the "Theta" platform destined for similar vehicles at other GM brands, but maintained Saturn tradition by wearing thermoplastic vertical body panels.

Vue initially offered the two L-Series engines. The V-6 came only with a new five-speed automatic transmission and an all-wheel drive system (AWD) with no transfer case or low-range gearing. The four-cylinder teamed with front drive and five-speed manual or with front drive or AWD operating through the promised CVT, called VTi (for "Variable Transmission, intelligent").

Developed by GM's Hydramatic Division and sourced from Europe, the CVT was another Saturn first in American production. Like similar designs at Honda and Audi, it used a special drive belt running between two laterally expandable pulleys to provide a near-infinite number of drive ratios. Electronic control insured the transmission was always in the right "gear" for optimum performance and fuel efficiency.

Interestingly, Saturn claimed 0-60 mph acceleration of 10.2 seconds for the front-drive Vue with CVT versus 11.1 with manual. The AWD V-6 was pegged at 8.4 seconds, which Car and Driver verified in its first full Vue test. Another class exclusive was electric power steering, with motors replacing power-sapping hydraulics.

Otherwise, Saturn's SUV closely matched its rivals in dimensions, utility, and fuel economy. Consumer Guide® found that it "leans more in corners than Escape or CR-V and tends to nose-plow where most compact SUVs feel nimble." Steering was "vague on-center and doesn't impart much road feel."

But ride was judged a "strong point. Tires and suspension [four-wheel independent] do a good job of absorbing the worst bumps…" CG's overall assessment: "What Vue lacks in handling it more than makes up for in versatility, ride quality, and interior comfort. Even more attractive are its competitive pricing [about $16,300-$22,600] and the high customer-satisfaction ratings for Saturn's dealership experience and no-haggle price strategy."

Vue got off to a good start, finding more than 75,000 buyers in calendar 2002 and nearly 82,000 in '03. Though that was a modest showing by historic U.S.-industry standards, it was creditable in the far-more diverse and ruthless new-century market.

Most buyers preferred the AWD V-6 with its orthodox automatic transmission -- a good thing, as the CVT was delayed by teething troubles to mid-2002 and was hard to get even then. Automotive News estimated that only 37 percent of Vue production was so equipped. No matter. The V-6 increased its popularity for 2003, when Saturn offered it with front-wheel drive, too. One other change that season was the new option of leather upholstery and heated front seats.

But the Honda V-6 made a fine starting point for the Vue Red Line, the first in a planned series of sporty Saturn submodels. Arriving at mid-2004 as a $1995 package for V-6 versions, the Red Line also included a lower-riding firmed-up suspension with 18-inch wheels and tires, plus specific trim inside and out.