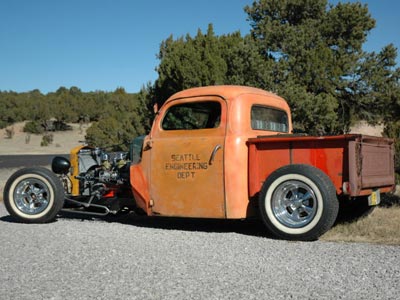 What exactly is a rat rod? Ask five different rat rodders and you might get five different answers. At the most basic level, a rat is a classic car that has not been restored. Those are the two key elements. The "newest" rat rods are from the early '70s, and most rodders would say a true rat rod comes from the '60s or '50s. Some are even built using various components from the 1930s. Unrestored means you don't replace that dented fender; you simply hammer it out or just leave the dent. If it's rusted, well, that's all the better. Glossy, two-tone paint jobs are out of the question. If a rat rod is painted at all, the paint is typically a flat finish, and it's applied with spray cans. If a part absolutely needs to be replaced, don't worry about finding an aftermarket replica. Find a part from another old car and use that. If you have to weld, bend or machine the piece to make it fit, that's part of the fun. The best rat rodders just fabricate the part themselves if they need to.

When you get beyond "old and busted," there are some characteristics usually identified with rat rods. They're typically loud and usually made to go fast. Anything unnecessary is stripped away, including, in many cases, mufflers and pollution control devices. Rat rods seem to come with a certain outlaw mentality. They're also usually heavily modified from their stock form. Lowered suspensions and chopped roofs are common, and some cars are shortened, lengthened or made with completely custom designs.

We spoke with Jim Marquez, a rat rod builder and enthusiast and member of the Junkyard Pirates car club. He felt the term rat rod itself was somewhat diluted. "I prefer the term hot rod," he said. "Now there are cars that are built specifically to be called a 'rat,' and most of them would be made to look rusty, weathered, beaten and shot up. I wanted a mean, fast, scary car, and that's what I built. Everyone who saw it said, "Cool rat," but to me it was just a hot rod. A car made for nothing but going fast."

Being a rat rodder is all about cars, then, right? Not to everyone. In the next section, we'll look at the fashion and music that some people feel are integral to the rat-rod scene.