Mercury Ponycars of the 1970s 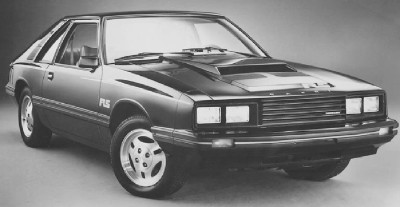 The 1979 Mercury Capri, unlike earlier models with the same name, was a twin of the Ford Mustang.

The ponycar field was one area where Ford and L-M divisions parted company in the '70s. The Mercury Cougar began diverging from the sibling Ford Mustang as early as 1971, when both models were redesigned. The Mercury swelled by two inches in wheelbase instead of one (to 113 inches) and looked considerably bulkier. Standard and XR-7 convertibles remained through the end of this generation in 1973, and have become minor collector's items, primarily by dint of low annual production: fewer than 2000 of each type, except for the 3165 XR-7s in '73.

Of course, this only reflected the abrupt drop in demand for all ponycars after 1970, and it prompted Mercury to chart a new course for Cougar. While Mustang became a smaller, lighter, Pinto-based sporty car for 1974, Cougar grew into a kind of alternative Thunderbird, adopting the 114-inch-wheelbase two-door platform of Mercury's midsize Montego models.

Oddly, the L-M studio created the design chosen for the production Mustang II. But rather than field a badge-engineered clone of that car, the division opted to continue with the German-built Ford Capri it had been selling successfully since 1970 -- a "mini ponycar" like Mustang II, but better-built and more roadable.

The Thunderbirdesque Cougar continued through 1976 as Mercury's marker in the midsize personal-luxury segment dominated by the Chevrolet Monte Carlo and Pontiac Grand Prix. The name was diluted for 1977, when it replaced Montego as the sole intermediate line (including a wagon), with the XR-7 label reserved for a single top-shelf coupe.

Things were temporarily sorted out again for 1980, when Cougar really was a Thunderbird, a twin to that year's new downsized model on a special 108.4-inch version of the "Fox" corporate platform.

In between, Ford again redesigned the Mustang, and this time Mercury wanted in. The result was a new American-made Capri for 1979. The direct descendent of the genuine Cougar ponycar, it was virtually identical with that year's new-generation Mustang save somewhat busier styling on the Ford's three-door hatch coupe body style, the only one available.

Capri offered the same four engines as Mustang in base and luxury Ghia ­models (the latter honoring the famed Italian coachbuilder that Ford had purchased in 1970). More enthusiastic types could order a sporty RS package roughly comparable to the Mustang Cobra option (Mercury never called it "Rally Sport," likely for fear of objections from Chevrolet).

One of the last cars of this era with a distinctly Mercury character was the Cyclone, which bowed out after 1971. Offered that year with standard 351 and optional 429-cid V-8s, this muscular midsize was impressively fast.

Swoopier sheetmetal set it clearly apart from run-of-the-mill Montego linemates and Ford's corresponding Torino GT and Cobra, particularly the protruding nose and "gunsight" grille that appeared with the midsize line's 1970-71 facelift. Reflecting the muscle-car market's sad state of affairs at the time, Cyclone sold poorly in its farewell season, especially the desirable low-production Spoiler hardtop (just 353 of the '71s were built).