The Mercury Topaz and Mercury Sable 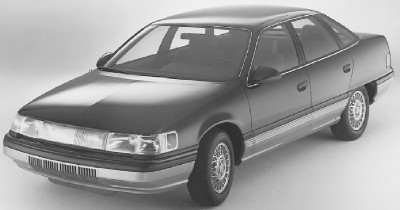 Mercury was well represented in the hard-fought compact and midsize battles of the '80s, its respective warriors being the Topaz and Sable.

Topaz, arriving for 1984 as the front-drive replacement for Zephyr, was a predictable kissin' cousin of Ford's new Tempo and thus evolved in parallel with it. Included in developments through decade's end were an available high-output 2.3-liter four, sporty two-doors, 1987's new all-wheel-drive option, a stem-to-stern makeover for 1988 sedans, and an optional driver-side airbag starting in 1986 (one of the earliest domestic cars to offer that feature).

Dearborn designers tried to make Topaz look somewhat different from Tempo at each end and by deleting the Tempo sedan's rearmost side windows -- not huge distinctions, but another small sign that Mercurys were becoming individual once more.

A pleasant and capable compact, though not state-of-the-art, Topaz followed Lynx in generating lower volume than its Ford counterpart: 80,000-128,000 a year, about half of Tempo's sales. But again, that volume was helpful to L-M dealers.

Sable was Mercury's version of the acclaimed front-drive Ford Taurus, and thus shared most of its widely praised basic design. There were exceptions, though. Where Taurus had three trim levels, Sable offered two: GS and upmarket LS. Mercury also decided it didn't need Ford's small 2.5-liter four after '86 -- wise, as most Taurus buyers decided they didn't need it either.

This left 3.0-liter and, from 1988, 3.8-liter "Vulcan" V-6s. Both produced 140 bhp, but the 3.8 was the engine of choice for all-around driving due to its larger displacement and commensurately greater torque (215 pound-feet vs. 160). Sable also had more simulated wood on the dash and door ­panels.

But the real distinction was outside. Where the four-door Taurus sedan wore a "six-light" roof treatment, the Sable version had a rear window wrapped fully around to the rear-door trailing edges for a sleek hidden-pillar effect. Also, Sable's rear wheel arches were flat-topped, versus rounded on Taurus.

Even more dramatic was Sable's unique front "light bar," a set of running lights behind a wide central white lens that illuminated with the headlamps to make both the sedans and five-door wagons unmistakable at night. The net effect of these simple but clever differences was to give Sable an identity quite apart from that of Taurus. Seldom in recent times had a Mercury been more its "own car" -- or more handsome.

Sable didn't get anything like the high-performance '89 Taurus SHO, but this was a reasonable marketing decision given Mercury's more luxury-oriented clientele. Those folks no doubt appreciated useful 1990 upgrades such as optional antilock brakes for sedans, a standard driver-side airbag for all Sables, a dash reworked to be more ergonomic, and new features like an optional compact-disc player and standard tilt steering wheel.

With a stunning new Cougar to carry the performance banner, plus the updated Topaz, evergreen Grand Marquis, and strong-selling Sable, Mercury could take justifiable pride during Golden Anniversary 1989, when total domestic volume (excluding "outsourced" products like Tracer) approached a smashing 500,000.

Despite occasional mistakes and some rough periods in its first 50 years. Mercury had produced some of America's best-liked automobiles. Now, on the eve of its second half-century, it was doing so again.

But calendar-year domestic sales plunged to around 309,000 in 1991, reflecting the onset of a deep new national recession that would last a good three years.