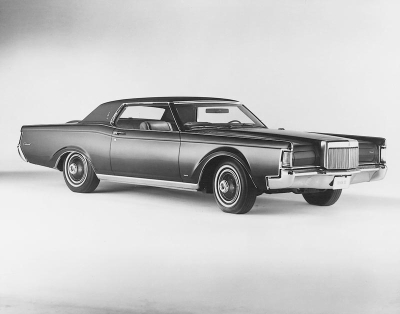 The 1969 Lincoln Mark III, with its more than six-foot-long hood, was immensely popular, nearly matching the Cadillac Eldorado in sales.

Lincoln's most intriguing development for 1968 was the $6585 Continental Mark III. Not a revival of the leviathan '58 Mark III, this was the putative successor to the charismatic 1956-57 Mark II. It bore the personal stamp of company president Henry Ford II, just as his brother, William Clay, had influenced the Mark II and their father, Edsel, had hatched the original 1940 "Mark I" Continental. Why "Mark III" instead of the expected "Mark VI?" Because HF II didn't view the heavyweight 1958-60 Mark III/IV/V as true Continentals.

But this new one was true to its heritage, at least in spirit. The project had begun in late 1965 as a personal-luxury coupe with long-hood/short-deck proportions in the Continental tradition. Exterior styling was naturally supervised by corporate design chief Gene Bordinat. Hermann Brunn, scion of the great coachbuilding family and a member of Bordinat's staff, was chiefly responsible for the interior, endowing it with large, comfortable bucket seats and a dashboard with simulated woodgrain trim and easy-to-reach controls. Henry Ford II himself selected both the interior and exterior designs from numerous proposals submitted in early 1966.

The result was actually a structural cousin to the new-for-'67 Thunderbird sedan, set on the same 117.2-inch wheelbase (some nine inches shorter than the Mark II's). Overall length was identical with that of Cadillac's new 1967 front-wheel-drive Eldorado. Though slightly baroque, the Mark III was handsome, helped by America's longest hood -- more than six feet. It also offered a wide choice of luxury interiors and 26 exterior colors, including four special "Moondust" metallic paints. The 1969-71 models cost a fair bit more: ultimately over $8800. Standard equipment ran to Select-Shift Turbo-Drive automatic, power brakes (discs in front, drums in back), concealed headlamps, ventless door windows, power seats and windows, flow-through ventilation, and 150 pounds of sound insulation. Beneath that long hood was a new 460 cid V-8 -- one of Detroit's largest -- with 10.5:1 compression and 365 bhp. Also adopted for standard '68 Continentals, it would remain Lincoln's mainstay powerplant for the next 10 years.

Because of a late introduction (in April), the Mark III saw only 7770 units for model-year '68. But there was no question that it was right for its market. As proof -- and despite no major change -- more than 23,000 were sold for '69, another 21,432 for 1970, and over 27,000 for '71. The front-drive Eldorado may have been more technically advanced, but the Mark III seemed to have more magic, for it nearly matched Eldorado sales each year through 1971 and never trailed by more than 2000. This was a great achievement considering Lincoln's annual volume had never come close to Cadillac's.

Aside from the larger engine, the '68 Continental sedan and hardtop updated their basic '66 look with a new horizontal grille texture and matching rear-panel applique, beefier bumpers, and large "star" ornaments on the nose and trunklid. A multifunction lamp at each corner imparted a cleaner look by combining turn signals, side-marker lamps (newly required by Washington), and parking lamps (front) or brake/taillamps. Also new were a government-required dual hydraulic brake system with warning light, a four-way emergency flasher, and an energy-absorbing steering column and instrument panel. Model-year volume for this line totaled more than 39,000.