Lincoln Styling in the Late 1950s 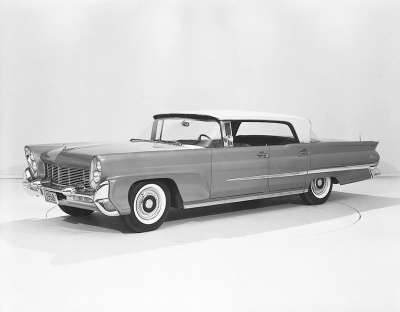 The 1958 Lincoln Capri Landau was longer and wider, during a time when even luxury buyers were interested in smaller cars.

Lincoln styling in the late 1950s ushered in a new era. The '56 Lincolns were new -- really new. Ads proclaimed them "Unmistakably Lincoln," but there was scarcely a trace of the trim '55s. Wheelbase grew by three inches, overall length by seven, width by three inches.

Capri now signified the lower series, Premiere the costlier models. Body-style assignments were unchanged, though pillared four-doors were made to look much like hardtops. Styling, partly previewed by the 1954 Mercury XM-800 show car, was fully up to date, with a wraparound windshield, clean grille, and peaked headlamps. Rakish vertical taillights capped long exhaust ports flanking a "grille" motif that echoed the front-end design. Ornamentation was simple, with two-toning confined to the roof.

Matching the expansive new '56 styling was an expanded engine, a Y-block enlarged to 368 cid and 285 bhp. "True power that works for your safety at every speed," blared one ad. Despite their greater bulk, the '56s didn't weigh much more than the '55s. But they cost a whopping $500-$700 more, the range now running from $4120 to about $4750. Yet as the only make with a major restyle instead of a mere facelift, Lincoln did well for '56, moving more than 50,000 cars. Still, even that was only about a third of Cadillac's total.

Prices rose another $500-$700 for 1957, when Lincoln joined a popular Detroit trend by offering its first four-door hardtops, dubbed "Landau" and available in each series. Huge tailfins sprouted, and the front gained "Quadra-Lites": conventional seven-inch-diameter headlamps above 53/4-inch "road" lamps. Though not a true four-light system, it put Lincoln ahead of most rivals. Compression went to 10:1, horsepower to 300. Overall, 1957 was a good, but not great, Lincoln year. At just over 41,000, model-year volume was slightly higher than for Chrysler's Imperial but still less than a third of Cadillac's.

Lincoln pinned hopes for 1958 on yet another all-new design. But '58 proved to be a horrible year for Detroit and a devastating one for Ford's finest, considering the millions invested in new tooling. A flash recession sent the economy reeling and buyers rushing off to buy more-economical cars as industry sales fell 50 percent from 1957. Ford trailed Chevrolet by a quarter-million units, Dearborn's new Edsel began a rapid slide to nowhere, and Mercury ran 46 percent behind its '57 pace. The '58 Lincolns were longer, lower, and wider in a year when even luxury-car buyers were starting to think about more-sensible size. As a result, model-year production tumbled.

At the bottom of this avalanche was a square-lined giant stretching six inches longer overall than the '57 Lincoln on a 131-inch wheelbase. It was easily recognized, for there was nothing else like it: heavily sculpted sides, a wide grille flanked by true quad headlamps in garish slanted recesses, enormous flared bumpers. Under a hood not much smaller than a Ping-Pong table was 1958's largest American passenger-car engine: a new big-block 430-cid V-8 making 375 bhp. Frameless unibody construction was an unexpected departure for the luxury field.

Of course, this package had been conceived in the far healthier market of 1955. And recession or not, most luxury buyers still wanted big cars like this. Despite appearances and 21/2-ton curb weights, the '58 Lincolns were surprisingly quick in a straight line and not that clumsy in curves. But they were too large and ornate for a public that was tiring of blatant excess. Cadillac did better business with a heavy, if still glittery, facelift, and Imperial offered a mild restyle of its tasteful, though heroically befinned, '57s. Both rivals also had ­lately expanded offerings, and comparable '58 Cadillacs cost several hundred dollars less than Lincolns. No wonder 1958 was a debacle for Dearborn's prestige make. At least it ushered in a three-year program that would culminate in a more-compact -- and vastly more-successful -- new Lincoln for 1961.