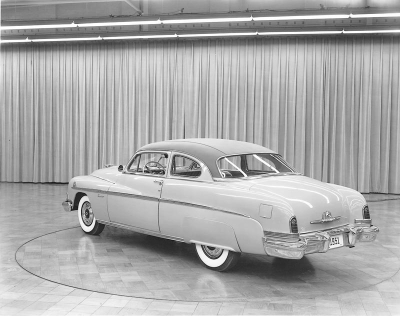 The 1951 Lincoln Lido Coupe was a successor to the "bar of soap" design style.

Dearborn's original '49 planning called for a 118-inch-wheelbase Ford and a 121-inch Mercury. What emerged as the Cosmo­politan was conceived as a Zephyr. At the last minute, Ford's policy committee, led by Ernest Breech and Harold Youngren, mandated a smaller 114-inch-wheelbase Ford, so the proposed Mercury became the '49 standard Lincoln and the 118-inch Ford was made a Mercury -- hence the latter's change from "senior Ford" to "junior Lincoln" in this period. The ex-Mercury Lincolns were thus much cheaper than the Cosmos, spanning a $2500-$3100 range versus $3200-$3950.

Lincoln's first new postwar generation continued for the next two years with no major alteration. Offerings, however, were shuffled for 1950, as the standard convertible and the tubby Cosmo Town Sedan were deleted. This left a notchback coupe and a four-door sport sedan (with throwback "suicide" rear doors) in each series, plus a Cosmopolitan convertible. There were also two newcomers for 1950: the $2721 Lido and $3406 Cosmo Capri. These were limited-edition coupes with custom interiors and padded canvas tops offered in lieu of a true pillarless hardtop to answer Cadillac's 1949 Coupe de Ville. Few were sold through 1951.

All 1950 Lincolns sported a restyled dashboard by chief designer Tom Hibbard. It was an attractive "rolled-top" design with an oblong instrument cluster, a format that would continue through 1957. A self-shifting Hydra-Matic transmission, bought from archrival GM, arrived as a new 1950 option; it would be standard in 1952-54. The '51 models were spruced up by longer rear fenders with upright taillamps (versus the previous round units), plus a simpler grille and different wheel covers.

While not known for performance, Lincoln had enough of the right stuff to place ninth in the 1950 Carrera Panamericana -- the first of the legendary Mexican Road Races. Lincoln then won the 1951 Mobilgas Economy Run with an average 25.5 mpg. Neither of these feats helped sales, which were well down from record '49. The totals were just over 28,000 for 1950 and a more gratifying 32,500 for '51.

All Ford Motor Company cars were completely new for '52 but though sales rose -- to nearly 41,000 by '53 -- Lincoln was still miles behind Cadillac. One problem may have been sedate, square styling through 1955: again very much like Mercury -- and also Ford. Uniformity may have caused trouble, too, with only the same five models offered through '54. Cosmopolitan became the lower series in this period, Capri the upper. Both listed four-door sedan and a belated hardtop coupe (three years behind Cadillac's); Capri added a convertible.