Lincoln Cars of the 1940s and The Lincoln Continental 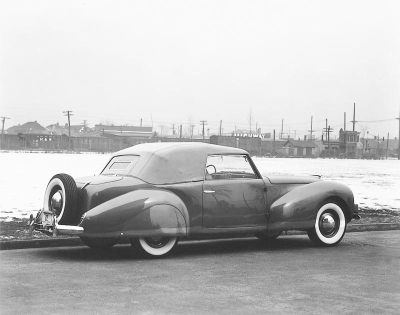 The 1939 Lincoln Continental was conceived by Edsel Ford and caused an immediate sensation.

Though executed by Bob Gregorie, the Lincoln Continental's styling was conceived by Edsel Ford, who directed him to make it "thoroughly continental," complete with outside spare tire. The design originated with a one-off convertible that Edsel used on his annual winter vacation in Palm Beach during 1938-39. Everyone who saw it thought it sensational, which encouraged Ford to offer production models scarcely a year later. A coupe and cabriolet debuted at about $2850 and brought customers into Lincoln dealerships by the thousands.

Continental was broken out from the Zephyr line for 1941, and received its own badges. Model-year production increased from 404 to 1250. Meantime, Lincoln maintained a semblance of K-Series coach built tradition with a Zephyr-based Custom sedan and limousine on a 138-inch wheelbase. But at about $2800, only 650 were called for. The Briggs town limo was scratched for '41, but other Zephyrs returned with minor mechanical improvements, including power tops for convertibles and optional Borg-Warner overdrive in place of the two-speed Columbia axle. Styling changes were slight: fender-mounted parking/turn-indicator lights and, for Continentals, pushbutton exterior door releases (replacing handles). In all, Lincoln built about 18,250 cars for the last full model year before World War II.

War-shortened 1942 brought significant engineering and design changes. The V-12 was bored out to its limit for 305 cid and yielded 10 additional horsepower. A flashy facelift forecast immediate postwar styling. All models now had longer and higher fenders, a busy two-tier horizontal-bar grille, and headlamps flanked by parking lights on either side. Overall height was a bit lower, curb weights a bit higher. Lincoln built 6547 of these cars by early February 1942, when the government ordered a halt to civilian production for the duration.

Despite the dictates of war, Ford stylists found time to experiment, making hundreds of renderings and dozens of scale models. Most involved the "bathtub" look that materialized on several makes for 1948-49. Some Lincoln concepts bordered on the grotesque. Many looked as if they'd been "carved out of a bar of soap," as one stylist put it.

Like most other makes, Lincoln resumed peacetime production with warmed-over '42 models that would not change much through 1948. However, the prewar Customs and three-passenger coupe did not come back, and the Zephyr name was abandoned for just plain Lincoln. The V-12 reverted to its pre-1942 displacement and horsepower dropped to 125. The larger bore had created casting problems for the factory and mechanics found it difficult to rebore for overhauls. Because of the V-12's design flaws, overhauls were all too frequent -- especially if the maintenance schedule wasn't rigidly followed. Custom interiors were still available for closed standard-model Lincolns.

The main design difference between 1946 and '42 was grillework composed of vertical and horizontal bars, with a Lincoln emblem in the upper segment, plus a new winged-globe hood ornament. The 1947s carried "Lincoln" lettering on the hubcaps, plus pullout door handles, "pocket" interior armrests, and a hood ornament with a longer wing. There were no visual changes for 1948.

Lincoln's first new postwar cars arrived in mid-1948, but a Continental wasn't among them. One had been planned, but was shelved due to low projected sales. It would have looked clumsy anyway, and some Ford designers, respectful of the late Edsel Ford (who died in 1943) were thankful it didn't appear.