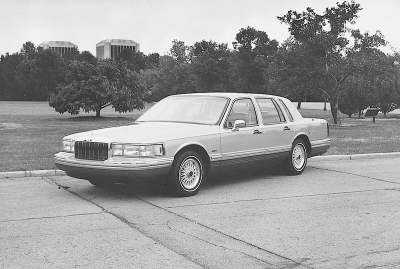 The 1992 Lincoln Town Car was "fully redesigned," yet Town Car loyalists found it similar enough to older models that it enjoyed sales success.

A faint hint of the future arrived for 1990 in the first fully restyled Town Car in a decade. Actually, it was little more than the old model in new aerodynamic clothes. Dimensions, weight, and powertrain were all little changed. Not everyone liked the more rounded new look -- but then, Lincoln had the unenviable task of needing to modernize its top-seller without making it look too different.

Indeed, designers tried hard to satisfy Town Car loyalists by retaining opera windows and a square "formal" grille, though both were tastefully muted. Also continued were the expected lush interiors with cushy bench seats, tufted upholstery, pseudo-wood dash trim and power everything. Base, Signature, and Cartier models were still available to ease the minds of troubled traditionalists. Yet the 1990s did advance the Town Car with high-tech features such as speed-sensitive power steering, self-leveling rear air springs, and airbags for both driver and front passenger -- all standard at base prices in the $27,000-$32,000 range. Antilock brakes were optional at $936.

With all this, the rejuvenated Town Car was another sales hit on a lengthening Dearborn list. Model-year volume topped 147,000, a healthy gain of almost 20,000 over the still-popular '89. L-M must have heaved a big sigh of relief, for the Town Car still accounted for more than 60 percent of total Lincoln sales. For 1990 it outpolled the four-door Continental by over 2-to-1 and the Mark VIII by almost 7-to-1. It was thus a key factor in boosting Lincoln volume so much closer to Cadillac's.

But "closer" can still leave an unbridgeable gap, and Lincoln sales continued to trail Cadillac's into the early '90s by 22,000 to 78,000 units. Then again, Cadillac should have had the edge with its much broader lineup, so Lincoln did very well in running so consistently close with just three models. Evidently, a good many buyers agreed with the make's ad slogan of the time: "What a Luxury Car Should Be."

Even so, a sharp new recession and increasing luxury competition diminished Lincoln's yearly volume after 1990, pushing it down to the 160,000-197,000 range through middecade. But the Town Car kept rolling on, accounting for fewer buyers in this period but an even bigger piece of Lincoln's total sales pie, around two-thirds in this period.

Considered improvements played a part in this performance. The biggest one occurred for 1991, when Town Car introduced the first in a new Dearborn family of modern overhead-cam engines: the so-called "modular" (sometimes "mod") V-8. The name referred to a basic block that could also be used for V-6s and even slant-fours built on the same tooling and assembly lines. The core V-8 allotted to Town Car was a single-cam 4.6-liter unit with electronic multiport fuel injection and cast-iron block and heads. Standard horsepower was 190, up 40 from the ousted pushrod 302/5.0-liter, or 210 bhp with optional dual exhausts. Though not a huge advance for smoothness or quietness, the "mod" V-8 was more easily tuned than the old 302 for the tighter emissions limits then coming on the scene.

The '91 Town Car also boasted a revised front suspension for slightly crisper handling, plus better stopping ability via standard four-wheel disc brakes (versus rear drums). A new option also enhanced "active safety." Called Traction Assist, it was a simple form of traction control that relied on the ABS wheel-speed sensors and was thus tied to the available antilock brakes. When the sensors detected wheel slip, the system would automatically apply gentle pressure to the rear brakes until grip was restored. Other Lincolns would get this, too.

Town Car then stood pat for a few years, though there were notable minor changes. For example, 1992 brought more-responsive electronic shift control to the four-speed automatic transmission, plus a safety interlock that prevented shifting from Park without depressing the brake pedal, a legacy of the late '80s furor over "unintended acceleration." Research determined that unintended acceleration was caused by mistaking the accelerator for the brake pedal. Subtle grille and taillight revisions arrived for '93, as did a handling package option with somewhat firmer damping and wider tires on alloy wheels. The latter was welcome, if paradoxical for such a big cruiser.

There was also a new "designer edition" for '93, this one inspired by golfing great Jack Nicklaus. It was offered only this one year for the midline Signature Series. The dual-exhaust engine became standard for '94, as did high-tech "solar-tint" glass for all windows. The '95s got a few cosmetic touchups, and the Signature and top-line Cartier gained a new three-mode power steering system that allowed choosing low, medium, or high steering effort with the push of a dashboard button.