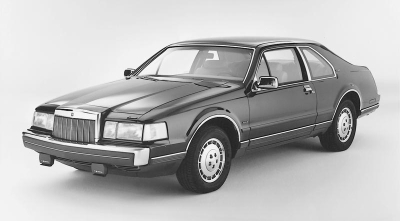 With its aerodynamic look, the 1985 Lincoln Mark VII LSC represented a departure from the typical stodgy Lincoln design.

After years of square-lined formality, Lincoln's premium coupe took a dramatic new direction with the 1984 Mark VII. Though it shared a platform with the bustleback Continental, this swoopy semifastback was derived from the new-for-'83 Ford Thunderbird/Mercury Cougar. The result was smooth, distinctive, and more visually aerodynamic than any previous Mark. A humped trunklid, modest taillamps in the rear fender trailing edges, and a toned-down Mark grille were stylistic links with the past, but the car was clearly aimed at a very different clientele: younger, affluent buyers who'd been defecting to high-dollar, high-status imports, a group Lincoln had never courted before. It was also a bold challenge to Cadillac's Eldorado, which was still relatively overblown.

The Mark VII was an instant critical success, especially the performance-oriented LSC (Luxury Sport Coupe) -- the fabled "Hot Rod Lincoln" come to life. Enthusiast magazines even thought it a credible rival to the vaunted BMW 6-Series and Mercedes-Benz SEC. No wonder. Where the base and Designer models had a soft ride and traditional appointments, the LSC boasted a firmer suspension with fat performance tires on handsome cast-aluminum wheels, plus multiadjustable sport bucket seats and Lincoln's best cloth or leather upholstery. For 1985 it adopted the Mustang GT's high-output V-8 with 165 bhp (versus 140 for other models). The '86 got an even hotter port-injected engine with 200 bhp (versus 150 bhp on other Marks), plus standard ABS four-wheel disc brakes and a nice set of analog gauges (replacing the digital/graphic electronic display retained for its linemates). Engine refinements extracted another 25 bhp for 1988-90.

With all this, the LSC was the most overtly sporting Lincoln since the very first Continental and the most roadable Lincoln since the "Mexican Road Race" days. It was also one terrific buy at initial prices of $23,700 -- about half the cost of erstwhile German competitors. Lincoln-Mercury planners thought lesser VIIs would outsell it, but buyers confounded them by ordering more LSCs -- enough that by 1988, the original four models had been cut to just LSC and Bill Blass. Overall Mark VII sales were good: 30,000-plus in the first season 15,000-38,000 thereafter. Prices inevitably escalated, reaching the $27,000 level by decade's end, but standard equipment also kept growing even as trim variations thinned. The 1990s boasted an important new safety feature in a standard driver-side airbag, which also brought a reworked, slightly more ergonomic dash.

Perhaps even more daring than the Mark VII was the all-new Continental sedan that bowed for 1988. Essentially a stretched version of the excellent midsize Ford Taurus/Mercury Sable, it was the first Lincoln with front-wheel drive and the first with all-independent suspension, both of which contributed to a noticeable increase in cabin room despite a wheelbase only half an inch longer than its bustleback predecessor's. In appearance, which L-M described as "aero limousine," this new Continental departed even more from tradition than the Mark VII: squarish but carefully detailed for efficient "airflow management." The old humped trunklid was abandoned at last, leaving only a vertical-bar grille to echo the past -- and even that was low and smoothly curved to match the nose and modern flush-fit Euro-style headlamps.

Powering the new Continental was the 140-bhp 3.8-liter V-6 made optional for the '88 Taurus/Sable, mounted transversely (in typical front-drive fashion) and teamed with a four-speed overdrive automatic transaxle. It didn't provide much snap in the heavier Conti (which was little lighter than its rear-drive forebear), and even L-M officials later admitted the car was underpowered for its class. At least quietness was a strength. A MacPherson-strut suspension employing dual-rate shock absorbers and LSC-style air springs, both computer-controlled, sounded great on paper. Unfortunately, this complicated design failed to provide a truly outstanding ride/handling balance in the real world. The standard all-disc brakes with ABS were superb, however, and interior decor was a blend of Euro-trendy and American traditional. For 1989, the dash and steering wheel were redesigned to accommodate dual airbags. Though just a driver-side airbag would have satisfied the government's new passive-restraint rule, Lincoln got the jump on Cadillac by providing inflatable cushions to protect both front occupants.

Arriving at dealers in December 1987, the front-drive Continental proved a strong seller, thanks partly to an attractive $26,000 base price -- again, thousands less than comparable European sedans. Model-year production totaled about 41,000 for '88, rose to 57,775 for '89, then climbed above 64,000 for 1990. The Continental wouldn't fare this well again, but the mere fact that Lincolns could now stand comparison with high-buck foreigners spoke volumes about how far Lincoln had come in the '80s and where it hoped to go in the '90s.