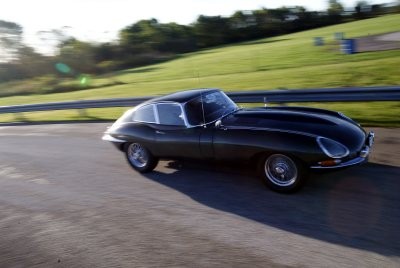 The Jaguar XKE was the stuff of dreams -- a racing car built for the road. See more Jaguar pictures.
©2007 Jaguar Cars and Wieck Media Services, Inc.

The Jaguar XKE seemed the fulfillment of a long-held dream: a roadgoing racing car. If you were the kind of driver for whom the Jaguar XKE carried that message, you approached the car with a sense of awe bordering on reverence.

Packaged in one wind-piercing projectile was a race-proven twin-cam engine with three carbs, a four-speed gearbox, a limited-slip differential, fully independent suspension, all-wheel disc brakes (still inboard at the rear!), rack-and-pinion steering, and a lightweight chassis featuring a fusion of space-frame and monocoque technologies.

The XKE was the child of the Jaguar D-Type, three times a winner at LeMans, and looked it. Better, the XKE performed almost like the D-Type.

Even so, its great prowess came with all the silky smooth sophistication customary in Jaguars, that feline merging of muscle with manner that left no one unmoved on levels both intellectual and intestinal. Yet even for confirmed Jaguar enthusiasts, this car was something new.

Twelve years of familiarity with the Jaguar XK-series had bred a feeling in some quarters that Jaguar's two-seaters were physically too large and heavy to be "true" sports cars. Yet against the Jaguar XK 150, especially, the XKE seems almost petite.

Despite that long nose, it is an inch-and-a-half shorter overall, and six inches briefer in wheelbase. Its rounded bodywork is an inch wider, but track measures an inch-and-a-half narrower. Matched roofline to roofline, the XKE coupe stands a remarkable seven inches lower. And it weighs several hundred pounds less than the closed XK 150.

This impression of compact efficiency continues as you open the very short door and fold yourself into its narrow opening (fewer than 21 inches separate windshield post from latch pillar). The sill is relatively high off the ground, and a bulky seven inches wide. At a diameter of 16 inches, the steering wheel commandeers some of the space your legs want as they slide in.

You are comfortable enough once settled, but the D-Type's "performance-first" racing philosophy is very evident in the snug XKE cockpit. Within the shorter wheelbase, the engine sits farther back than in the XK 140/150, and while interior volume is adequate, it is hardly generous. In fact, shoulder and head room are each an inch tighter than in the 150 coupe.

However, the instrument panel and steering wheel seem farther away. The wheel still adjusts for reach via a friction collar on the column and, reviving a good idea from the classic Jaguar SS 100, can be adjusted for rake via a wrench. Both column and pedals angle away from the engine, so you are immediately conscious of sitting with your legs slightly askew and with the wheel canted in your hands.

The wheel itself appears high-set, but is lovely to behold. In the style of the day it is large across but thin in the rim, made of polished wood and aluminum, and has racy "lightening holes" drilled into its spokes.

Those spokes are quite springy, though, which can allow a disconcerting amount of flex in your hands. The seat seems minimal: thin in the cushioning and short in the backrest.

Because you no longer perch atop a separate chassis, as in the XKs, you feel nestled much lower relative to both macadam and machine. The gearshift knob now stands almost as tall as the flat horn boss in the center of the steering wheel, and is only a handspan away from the rim.

For the first time on a Jaguar sports car since the SS 100, primary instruments -- rev counter and speedometer -- are located straight in front of the driver. And the tach has been changed so the needle now rotates in the same clockwise direction as the speedo.

Peer through the wide but shallow windshield -- so shallow it requires three short wiper blades for coverage -- and you are captivated by the sensuous curves of the hood. There is enough bodywork falling away out of sight to make you worry a little in tight quarters, but then, this car was not born for tight quarters.

That beautiful bulge rising so prominently in the center of the "bonnet" tells the tale; it seems to be pointing the way to the far end of the unimaginably fast Mulsanne Straight. Or to any horizon you care to imagine.