How much horsepower does a performance muffler add? 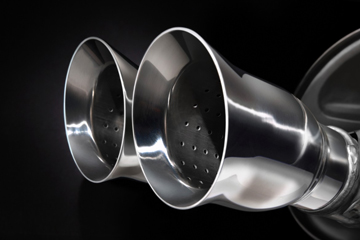 The 2014 Corvette Stingray's available dual-mode active exhaust system offers a 27 percent improvement in airflow. It features two additional valves that open to a lower-restriction path through the mufflers.
(© General Motors)

So ... performance mufflers. We're not talking about clamp-on oversize tailpipes -- those won't do anything at all to help your car's performance. In fact, they might actually slow your car down. That's because these parts just add weight and resistance without actually opening up the exhaust flow from the engine -- it overlaps to give the look of a bigger exhaust, but the same constricted old pipes are still doing all the work. Nope, if you want to experience a few extra horsepower, you've got to invest in high-quality exhaust parts. (And a cheap imitation "aesthetic" add-on won't give you the aural benefits, either ... but a real one will.)

When a real performance muffler is installed, it's usually as part of a more comprehensive cat-back system upgrade. (Cat-back just means everything from the catalytic converter on to the back of the car, including middle pipes, a resonator and a muffler or two. In most states, it's illegal to mess with the catalytic converter because of environmental regulations, but it's permissible to upgrade the cat-back components.) Since the muffler (actually, just the tailpipe) is what people actually see, it's one of those visual benchmarks that might indicate whether or not a car has been modified (if you're on the street checking out the competition or maybe shopping for a used car). Hence all those ghastly clamp-on tailpipe covers and extenders that just might be convincing enough to fool someone from a good distance away.

Let's be clear here: When talking about the muffler, understand that upgrading the cat-back system as a whole is really the only way you'll experience any notable power gains. It doesn't hurt to upgrade the muffler on its own, of course, especially if it's a rusted-out mess and you need to replace it anyway. But the gains, if any, will be minimal. Replacing your car's muffler alone is not enough to open up the restrictive exhaust system and allow the extra airflow that increases performance. Everything that comes before the muffler, where the pressure is greatest and performance potential is highest, will remain tight and congested.

MagnaFlow, an aftermarket exhaust manufacturer, says that its customers can expect horsepower gains of around 10 percent (which is a pretty commonly-quoted figure). However, MagnaFlow cautions that this is by no means a guarantee -- the car's overall condition plays a huge role in its performance potential, whether it has other upgrades or not. So don't expect a performance muffler alone to solve all your woes. Performance mufflers are designed to function best as part of a team effort.

Author's Note: How much horsepower does a performance muffler add?

Can we talk for a minute about the horrors that are clamp-on fake exhaust tips? No one really believes that a 15- or 20-year-old compact hatchback has a full performance exhaust that's so big, a bodybuilder could insert his arm up the elbow. Especially when the car still sounds terrible -- wheezing like a three-pack-a-day smoker. And what for? To entice competition that the car can't handle?

For the most part, it seems like those days are over ... at least where I live. Or maybe it's that I'm too old and jaded to notice it anymore. But I've always believed it's better to just drive the car completely stock than to waste money making it look like it has been modified. It was a tacky aspect of car culture back when a considerable segment of the population might have been fooled -- it's even worse now that the trick has run its course.