How can solar panels power a car? 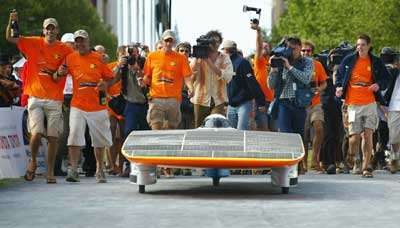 Canadian Marcelo da Luz is also trumpeting the solar car during his journey to the Arctic Circle in -- what else? -- a solar car. Although his single occupancy vehicle cost $1 million, he intends for the journey to communicate to the public the viability of solar energy for automobiles [source: CBC].

If that astronomical price stands out to you, consider the projected cost of the forthcoming Venturi Eclectic. The French company plans to show its final version of the model in October 2008, and it's slated for a price point of around $30,000. While that's a far cry from da Luz's expense, considering the size and limited range, this goes to show that solar technology is not cheap.

The cost of solar cells can range from $10 up to $400 each [source: Barry]. The more expensive they become, the better they are at capturing and converting sunlight. Race-worthy solar cars that can travel beyond 60 miles per hour (96 kph) and go for hundreds of miles use thousands of those solar cells across the body of the car. They also cost hundred of thousands of dollars.

Achieving speeds of 60 miles per hour solely from the sun has a lot to do with the weight and aerodynamics of the solar racecars. Their design, combined with the efficiency of the motor allows them to zip down the road with the same oomph that powers a hairdryer [source: MIT Solar Car Team]. While gasoline engine cars direct around 15 percent of the energy from burning fuel to actually moving the car, solar power achieves beyond 90 percent efficiency [source: FuelEconomy.gov].

All this fuel thrift doesn't translate to desirable aesthetics, however. For one thing, these one-seaters look like pancakes on wheels. And as you can guess, driving a car covered in solar panels may not be the most temperate experience. These purely solar-powered cars can heat up quickly since the passenger area is enveloped by the cells.

Then there's the problem of how to get around at night or on rainy days when the sun is nowhere to be seen. Here's where a battery or small gas engine would come in. Most viable solar car projects rely on additional power sources to ensure that the car gets going any time you need it to. In fact, James Dyson of vacuum cleaner fame recently publicized his intention to develop an electric car with a solar roof that would improve the mileage it could get [source: Derbyshire]. Used this way, solar power could serve as a range extender for electric cars, allowing the panels to provide the fuel while the sunlight is abundant, but kicking it to the battery once it goes down.

For related information on future cars, visit the links below.

Solar cars haven't caught on with the public yet, but solar car racing has been going on since the 1980s. Common entrants include school, corporate and hobbyist teams. You'll also notice many big-name automakers as team sponsors as well. Here are a couple of the longest-distance examples: