The Ferrari Golden Years, Ford, and the Dino 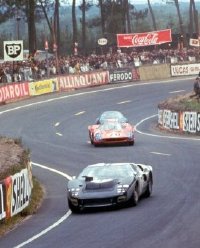 All the while, the road cars were fortifying their standing as the world’s best high-performance sports and GT automobiles. Production more than doubled over four years.

It was a luster that proved quite appealing to Ford Motor Company in the early 1960s. America’s No. 2 automaker was trying to cultivate a more youthful audience, and performance was the hot ticket. Nothing symbolized speed and horsepower better than racetrack success, and in the early ’60s, international racing success was spelled Ferrari.

Unbeknownst to most everyone, Ford included, was that Ferrari was already in negotiations over the sale of his company to a stalwart client: the wealthy Mecom family of Texas. The Mecoms had made a fortune in oil, but when John Mecom, Jr., learned of Ford’s interest, he knew his pockets weren’t deep enough to win that bidding war. “Once Ford entered the picture,” he remembered, “I backed away.”

Ford’s first contact with Ferrari was in May 1963, through the American company’s Italian subsidiary. According to a 1966 account in Road & Track, Ford Vice President and General Manager Donald Frey traveled to Italy as the front man in the talks.

Frey said the framework for a deal was settled upon fairly quickly. There were to be two companies. One, called Ford-Ferrari, would be responsible for the gran turismos Ferrari was already building. The second, Ferrari-Ford, would construct competition cars. Ford would be the majority shareholder of the road-car arm. Enzo Ferrari would be the largest shareholder in the racing company.

With that, an epic automotive David versus Goliath battle was joined. It would last the better part of five years. Dearborn’s principal weapon would be the GT40 series, beautiful midengine racecars developed with the full might of the Ford organization.

Enzo Ferrari was far from idle during this period. He rallied his troops, and they responded.

“When The Old Man wanted something you didn’t say no,” remembered Brenda Vernor, who moved from England to Italy in the early 1960s and eventually became Ferrari’s personal assistant. “Not because you didn’t want to do it, but because in a strange way it was a pleasure to work for Enzo Ferrari.

“So we [often] worked all day Sunday, and Monday morning I would find a little present on my desk with a card. He didn’t say ‘thank you’ but you knew he was in effect thanking you for your effort.

“I can recall a number of times taking food and wine to the mechanics at one or two in the morning. They too would not say ‘no’ to The Old Man. For these men it was also a joy to work for him.”

Ferrari was the last manufacturer to win Le Mans with a front-engine car -- the 330 TRI/LM in 1962 -- and the first to win it with a midengine car -- the 250 P in 1963. Now that Ford was in the game, it was time for Ferrari to play “no substitute for cubic inches.” It built a variety of sports-racing prototypes with ever-larger and more-powerful 12-cylinder engines, culminating with a 1967 endurance crown on the strength of the mighty 4-liter 330 P4 and 412 P.

Ferrari’s use of the midengine configuration in racing was not lost on the company’s sales force, its coachbuilders or its clientele. In the mid 1960s, a conflict over a midengine road car was seething behind the scenes at Maranello.

Sergio Pininfarina had personally handled his carrozzeria’s Ferrari account since his father had landed it in 1952. For much of 1965, he had locked horns with a conservative, truculent Enzo, trying to convince him to produce a road-going midengine machine.

“He kept insisting it was too dangerous,” the effervescent coachbuilder said. “While he felt it was fine for racing and professional drivers, he … was afraid of the safety, of building a car that was too dangerous for customers. That’s why he was preparing the front engine with rear drive, the classic layout. The idea of having all the weight in the back was upsetting to him.”

Pininfarina’s barrage finally yielded some results: Ferrari approved the experimental Dino for production. This one-off prototype came from Sergio’s fertile mind, and broke cover at the Paris Auto Show in 1965. A second, more-refined prototype was shown the following year at Turin.

The preproduction version appeared 12 months later and the world soon had its first road-going midengine “Ferrari,” though this beautiful V-6 two-seater was manufactured in cooperation with Fiat and did not, in fact, carry a Ferrari badge.

“When Mr. Ferrari finally said yes,” Pininfarina recalled, “he said ‘Okay, you make it not with a Ferrari name, but as a Dino.’ This was because the Dino was a less powerful car and in his [mind], less powerful meant less danger for the customers. I therefore had the permission to develop [it].”

In next few years, labor unrest in Europe and new safety and emissions regulations in America made life miserable for Enzo Ferrari. Learn how Ferrari weathered this period on the next page.