The Birth of the Ferrari Company 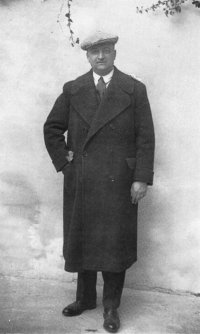 No sooner had hostilities ended in 1945 than Ferrari was on the phone to Gioachino Colombo. The stalwart engineer was then in his early 40s, and his résumé included a number of Alfa’s most famous models.

Colombo lived in Milan and welcomed the call from his friend. The engineer had been laid off from Alfa, and rumors of Fascist involvement surrounded him. “There was no unemployment compensation in my case,” Colombo wrote of his bleak situation in his autobiography, The Origins of the Ferrari Legend. “[That phone call] was something which could obliterate in one stroke those five years of war, bombardments and sufferings, and the upsets of evacuation.”

He traveled through the ruins of the Italian countryside with Enrico Nardi, a one-time Lancia test driver and future steering-wheel manufacturer. Within the first minutes of his meeting with Enzo, the engineer and Ferrari, the budding car constructor, got to the heart of the matter.

Ferrari asked Colombo what he would propose for a new 1500cc engine. “Maserati has a first-class eight-cylinder, the English have the ERA six-cylinder job, and Alfa have their own eight-C,” the engineer replied. “In my view you should make a 12-cylinder.”

“My Dear Colombo,” Ferrari responded, “you read my thoughts.”

Ferrari had been eyeing such an engine configuration for nearly two decades. “In the years immediately after the war I had an opportunity of observing the new Packard 12-cylinder on the splendid vehicles belonging to high-ranking American officers,” he noted in his memoirs. “I recall it was one of these 12-cylinder jobs which was purchased by Antonio Ascari in 1919, and then passed on by him to Maria Antonietta Avanzo, the first courageous woman driver of the postwar era.”

Baroness Avanzo confirmed her V-12-powered car did indeed give Ferrari the inspiration. “The Packard went from owner to owner,” she said in a 1969 interview with automotive journalist Valerio Moretti, “and no one managed to get any good results from it except Enzo Ferrari, who said that it had given him the inspiration for his future twelve-cylinder cars.”

Colombo returned to Milan, his head filled with ideas. Using a drafting board borrowed from Anderloni at Touring, he toiled away in the bedroom of his apartment. He began by designing the cylinder heads, then worked on the balance of the car. Assisting him were Angelo Nasi, head of Alfa’s industrial-vehicle chassis design, and Luciano Fochi, a young freelance designer.

Colombo worked on Ferrari’s car until November 1945, when Alfa management learned of his activities and rehired him to run its sports-vehicle division. The engineer recommended as his replacement was Giuseppe Busso, a talented technician who also had roots in Alfa.

Busso jumped at the chance. “I had to be ruthless in order to pull the 125 through its childhood illnesses, which were neither few nor insignificant,” he remembered in Ferrari Tipo 166. Giving Busso, Luigi Bazzi, and their group of young apprentices headaches were the V-12’s ignition and its cylinder-head gaskets. No less of a problem was the lack of high-grade materials and the poorly machined components from suppliers.

The motivated group kept at it until September 28, 1946, when the engine underwent its first bench tests. That same year, Ferrari changed the name of his company to “Scuderia Ferrari-Auto Avio Costruzioni.” Then, on March 12, 1947, Ferrari’s first car -- a 125 without coachwork -- ran under its own power for the first time. Busso captured the moment on film, a smiling Ferrari wearing a suit seated in the rudimentary car, surrounded by proud workers in grubby overalls.

The 125’s platform was simple -- a tubular chassis supplemented by leaf springs and shock absorbers. The 1496cc engine, depending upon its state of tune, produced between 72 and 118 horsepower. The five-speed gearbox was a rarity in an era when four-speed manuals were the rule for European sporting cars.

During the struggle to complete that first car, “I was beginning to be sincerely fond of Ferrari,” Busso observed. “[T]he practical experience of battling successfully with theoretical and practical problems of bringing a car like the 125 was very important to me and was to prove invaluable when I [later] confronted Alfa’s problems. Possibly my frequent contact with his son Dino and Signora Ferrari, even my listening to Ferrari unburdening himself about the health problems of these two and the anguish of seeing him cry many a time when talking about Dino, all may have contributed to my affection for Ferrari.”

Busso and his men made two 125s. The first was completed on May 8, 1947. It had a roadster body vaguely similar to that of the 815. The second 125 was finished the following day and was a much more elementary car with a torpedo body and cycle fenders.

The 125’s initial appearance was at Piacenza on May 11, and piloting the roadster was Franco Cortese, a talented driver who also was Ferrari’s traveling salesman in his machine tool business. Cortese’s contract was drawn up in April 1947, and stated he would earn 50,000 lire a month (around $84 at the time), with traveling expenses and incidentals covered by the company. Cortese would keep the driver’s race winnings, while Ferrari kept those won by the team.

In the 30-lap, 60-mile race, Cortese’s 125 S ran 27 laps before its fuel pump let go. Still, he set the fastest lap, showing his potential, and the car’s. Two weeks later in Rome, that potential was fully realized. After 40 laps and some 85 miles, Cortese and the 125 S took the checkered flag with an overall victory.

And so began the Ferrari legend. Cortese scored another victory that year, plus a pair of seconds and two class wins. “We would race every Sunday to test the car,” Cortese recalled in Ferrari Tipo 166. “I was alone [and] the others were mainly [driving] Maserati. But we were superior, the Ferrari was a more modern car, I would say exceptional for that period.

“It drove very easily [but] … it [had] a somewhat different engine. We were used to normal four- and six-cylinder motors [and] this twelve-cylinder was like an electric motor. It would ‘spin’ very easily, so one had to be careful.”

Enzo Ferrari was a master at motivating his employees and marketing his ideas. On the next page, his peers give firsthand accounts of his efforts.